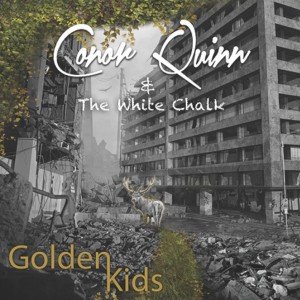 After leaving the show Conor took time out to write his own music and formed a band The White Chalk in April 2013. The band consists of Drums/Bass/Mandolin/Acoustic Guitar/Piano & Ukelele/Cello and female backing vocals.

Conor travelled to London in June 2013 to work with producer Tom Fuller and recorded 2 songs at the Cabin Studios “The Architects” and “Wolf Watching” Conor then returned to Ireland and teamed up with Philip MaGee who is the current producer of Kodaline to record 3 songs “Fade To Grey” “Atlantica” and “Carnival Of Lights” which were recorded in Transmission Studios in Longford.

On 19th August 2013 the band released their debut EP “Golden Kids” After 48 hours of the release the EP went to number 1 on the album chart downloads on iTunes.

This is a remarkable achievement for a singer song writer to produce his own music on an independent label and remove Now 85 from the number 1 spot which contains 44 tracks from the best know artists on the planet.

Following the success of the EP Conor and the band were chosen to play at one of Irelands premier festivals Electric Picnic performing to a full house in the Minefield Arena. The musical director of Electric Picnic Martin Mullingar said “ Conor Quinn & The White Chalk rocked the stage during their performance and will be back next year”

In September the band performed their first headline gig to a sell out audience at the Sugar Club Dublin.

The title track from the EP “Golden Kids” was chosen as the Play Irish Song of the month on Beat 102-103.

The title track from the EP “Golden Kids” is currently  on the A list at 2fm and is being played across all radio programs including Breakfast with Hector, Tubriy, Rick O’ Shea in the afternoon, Will Leahy Drive Time, Dan Hagarty alternative, Ruth & Paddy Weekenders, Marc McCabe and Cormac Battle.

The band appeared on Balcont TV in Dublin and reached the number 1 spot. They are currently number 3 in the Global Video section which is judged by a panel of experts from around the world.

The band are due to record their next EP in early December with producer Philip MaGee. Their new single Carnival Of Lights will be released in late November.