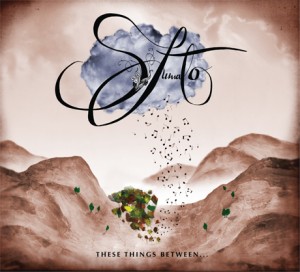 In the unpredictable, often shallow world we live in, it takes courage to follow your heart, and even greater strength to follow what some philosophers describe as your “bliss.”

Irish musician and songwriter Daithí Ó hÉiġnigh, however, has done just that. After years of finding himself in situations which felt fundamentally wrong, he woke up one day to find his entire world had fallen apart. So he stopped everything, set about expressing his feelings and unwittingly laid the foundations for what would prove to be a happy and fulfilling life… or so the story goes.

The result of this creative about-face is the forthcoming debut, These Things Between… Recorded under the band title of Sfumato (a painting technique used by Leonardo Da Vinci, meaning the softening of sharp outlines by subtle, gradual blending of one tone into another), the album is a balm for the sick and indignant as it relates via a searingly honest song cycle a troubled journey from darkness to light.

A clear vision and a truthful voice (complete with simple, heartfelt words delivered in an egoless manner) have been uncovered. From desolation to euphoria, from imprisonment to escape, from being beaten up by dogmatism to engaging with ambiguity… and ultimately allowing back into his life the grey areas found between black and white.
Daithí has fashioned something of a gem with These Things Between… From start (Fly To Me) to finish (I Was Hoping You Might…) it rings clear with frank and straightforward intent. The music zings with anti-authoritarianism. Daithí also produces the videos which accompany the music on similar staunchly independent lines.

The album, “These thing between…”, will be released on the 11th of May on CD and digital download by Learn To Love Records. 4 singles will follow throughout 2012 accompanied by Hi-Definition videos and remixes from the likes of Ian Williams (Battles), Sunken Foal, Somadrone, The Last Sound, Tim Green (The F*cking Champs), Sebastian Thomson (Trans Am), AKA JK (Producer – The Rapture) and Deasey Mooneye. These will be available as digital ‘bundles’ through iTunes. The singles will be “Fly to me”, “These things between…”, “Let me leave you” & “Song to myself”.

Irish artist Alan Clarke was commissioned to produce the artwork for the album.