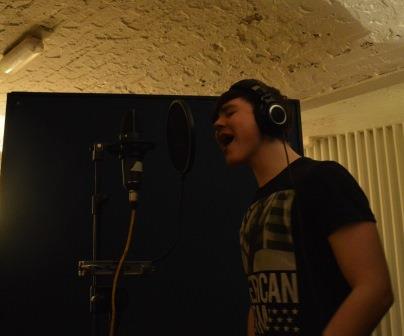 16-year-old Dublin singer-songwriter, Conor Hamilton, has just released his latest single, You Got It In You. The song was recorded at Dublin’s prestigious Sun Studios and produced by Mick Heffernan.

Despite his youth, Conor has talent to burn. Currently in Transition Year at Glasnevin-based Irish-language school, Scoil Chaitriona, there’s a different kind of transition taking place in his life that will prove many things to those who have doubts or problems with teenage kicks. And that transition is going from relative obscurity to becoming a household name.

It all started for Conor some years ago when he watched his younger sister, Taylor, perform as part of a stage school production. “It seemed like it was great fun,” Conor recalls, “and from that point on I had a strong feeling that music was what I wanted to do.”

Love of music was already there – part of the family genes, you could say. Conor’s father, James, had previous experience in various bands whilst growing up, and this ingrained passion for music had been passed on to his children.

“I liked the performing end of it,” says Conor, who has been a member of a couple of Dublin-based stage schools for several years. “And because my dad is so into music, there were always instruments lying around the house. I picked up a guitar at the age of seven, and shortly after started guitar lessons.”

Conor has continued to develop and over the past few years his profile has risen thanks to various presenting jobs for RTÉ Young People programmes (including Elev8, for which he interviewed, no less, Hollywood actress Jessica Biel). And when Conor is not doing irregular but very enjoyable jobs like this he’s focusing on his songwriting, which he began from the age of 11. Currently, he has over 25 songs under his belt.

“When you’re playing guitar and you get a good chord progression, and when you like it, a melody comes into your head,” explains Conor. “Writing songs is a great way to express yourself, a great way to get your feelings down onto a page. Am I a reflective kind of person? Well, I tend to think about things a lot – not necessarily in an academic way, but just thinking. And I like to spend a lot of time outside…”

Quality control is crucial to Conor, who always aims to write the best songs he possibly can. “I’m not into writing pieces of separate songs and then stitching them together to make one. I try to be consistent and finish one completely after another.”

To his credit, also, Conor can write songs in relatively short periods of time. “I’d be happy with songs, for example, that take about three hours. I don’t like songwriting to be a conveyor belt-type operation for me, though – I have to be in the right frame of mind. If songs are rushed, I think you can hear it.”

What inspires him to write songs? “Certain things… Looking out the window and something will catch my eye. And sometimes I write a song based around one word.”

So far, it’s so very good for this Dublin teenager who writes songs that are smart and contemporary but which are rooted in classic pop music traditions. Each step along the way, he says, has been small but significant – steps that lead to something a little bit bigger every time.

Conor’s latest release comes on the back of two previous singles (Daydreamer, Lately – both in 2013) and he has headlined a sold-out show at the Academy, one of Dublin’s premier music venues.

And Conor isn’t stopping there, as this summer will hopefully see the release of an as-yet untitled six-track EP.