Singer/songwriter Síomha Brock (pronounced Sheeva) is releasing a new download-only single on Friday May 4th 2012. The single, titled ‘Talk A Little Less’, will be available for download on iTunes. Siomha will be touring Ireland in May and June to promote the release of the ‘Talk A Little Less’. The tour dates are as follows and admission is free.

Siomha was a guest of Pat Kenny on his show on RTE Radio 1 in late January and performed with her band live in studio to promote the EP release and the upcoming tour. Her track ‘Right From The Start’ was featured on the RTE Radio 1 Playlist. 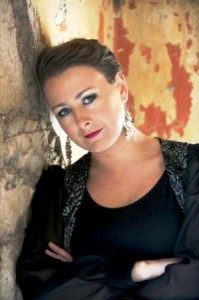 Widely recognized for her outstanding talents and versatility, Síomha is a regular performer on the Irish entertainment circuit. She has a huge love for jazz and soul music and these influences resonate in her own songs on her EP. She has also been a regular guest singer with the renowned Galway-based Black Magic Big Band.

A finalist in the Arthur’s Day ‘Play On The Day’ 2011 contest run by Guinness and RTE 2fm, she was described by Hot Press Magazine as a “star in the making”. Having supported leading performers such as Brian Kennedy, Freddie White and The Saw Doctors, Síomha is also an accomplished jazz singer and performed at the recent high-profile “Guinness Cork Jazz Festival”.

“A star in the making”
–Hotpress Magazine

“Síomha Brock’s well of influences and inspiration span the genres to include rock, country, folk and jazz. She’s a new creative talent with a self-assured cohesion that belies her tender years.”
-Gerry Quinn, Reviewer, Irish Examiner

“Síomha’s presence and powerful voice can fill a room on their own; her enthusiasm and energy towards her singing is infectious and most impressive, so much so that many may not notice how fine a guitar player she happens to be”
-Leo Moran, The Saw Doctors