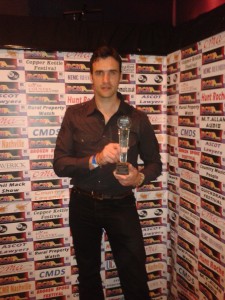 Joining the ranks of fellow nominees such as Lady Antebellum, Toby Keith and Taylor Swift, Irish country music sensation Pete Kennedy was honored to take home UK Album of the Year for The Nashville Sessions Volume 1 at the British Country Music Awards on Sunday. Pete was also nominated for Song of the Year for his upcoming single off of the album, “I Am The One.”

Pete was presented UK Album of the Year by the special guest of the evening and country music sensation, Sonia Leigh. “To be awarded for doing what I love is a dream come true,” said Pete. “My fellow nominees all have great albums as well and I was truly humbled to have taken home the award.”

Other award winners from the night included Toby Keith for International Act of the Year, Travellin Rose for UK Horizon Act of the Year and Nancy Ann Lee for UK Female Vocalist of the Year.

Pete will be traveling to Nashville, TN on Wednesday, September 5th to shoot his official music video for the BCM Song of the Year nomination “I Am The One.” The video is set to be released in late September along with The Nashville Sessions Volume 1 on September 17th to UK radio. Joining singing legend Neil Sadaka for his UK tour in October, and Philadelphia soul group, The Stylistics for their UK tour throughout November and early December, Pete is in store for many more musical career highlights!

Pete recently played the 101.8 WCR-FM Acoustic Stage at Wolvestock 18 in Wolverhampton, the UK’s largest country music festival. In the September 2012 issue of Up Country Magazine the reviewer wrote – “I went to see Irish heartthrob, Pete Kennedy, perform and I can assure you this young man will go far with his good looks personality and overall very good voice!”

For more information on Pete or to listen to the award winning album, please visit www.petekennedy.net.

To schedule an interview with Pete Kennedy, please contact Chelsea Ogden at 615-327-0100 or moc.aidemalp@nedgo.aeslehc.