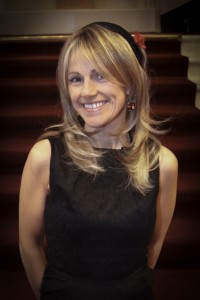 Sharon Shannon and the RTE Concert Orchestra have just released a brand new collaborative album, Flying Circus. The album is an arrangement of newly composed material which was produced and recorded over a four year period. During this time Sharon worked alongside the RTE Concert Orchestra led by principle conductor David Brophy and a host of talented musicians including guitarist Jim Murray, world renowned sax player Richie Buckley, orchestral arrangers Joe Csibi and David Hayes and many more, in writing, scoring and recording the music. The release of the album will be followed by a live tour including The Opera House, Cork on April 16th and The National Concert Hall in Dublin on April 17th. More live dates with the orchestra will be announced soon.

Sharon Shannon is a musical icon. For the past twenty years, her accordion playing has allowed her to travel the globe, collaborating with a host of performers and writers across a multitude of genres. Sharon has showcased Irish traditional music on a world platform and kept it relevant in a modern and contemporary sense. Her musicianship is key to this great success and her warm and generous spirit is renowned the world over, ensuring a long and fruitful career for the Galway woman. She has had many Number One albums and singles and has collaborated and toured with a myriad of household names from U2 to Willie Nelson, Steve Earle to Christy Moore, Shane Mc Gowan to Imelda May. Sharon continues to throw herself fearlessly into new projects and genres and this album with the RTE Concert Orchestra has been a particularly rewarding venture.

With the release of Flying Circus, Sharon is taking the opportunity to shine a light on her new campaign, ADOPT DON’T BUY, an impassioned plea to all those considering a new or first time pet to start their search at their local pound and animal rescue centre. Thousands of unwanted dogs, from Heinz 57’s to purebred pedigree pooches, tiny newborn puppies to dignified old ladies and gentlemen, are sitting in pounds and rescue centres across Ireland, waiting for families to call their own. With ADOPT DON’T BUY, Sharon hopes to make the wider public aware that pounds and rescue centres are the best, most cost effective way to find the perfect lifetime companion and every type of breed imaginable comes through their doors.

The track Top Dog Gaffo will be available as a download from www.sharonshannon.com in return for a donation, tiny or large, to Animal Heaven Animal Rescue.