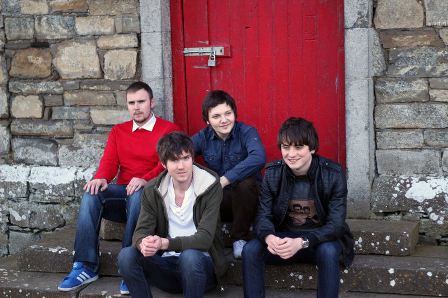 “We are not a supergroup yet”, ‘We are not SuperTramp or the Super Furry Animals’, so says the Kildare based 4 piece Indie combo SuperHanz. Lead vocalist, guitarist and songwriter Stephen Fagan says that the Band are happy to leave behind a string of Battle of the Bands victories and says that it is now time for the band to move to the next phase of its development and become more widely known to a greater audience.

“The experiences that we have gained playing live since we were sixteen has been a great help to us he says, but added ‘that the recently competed four track EP recorded at Westland Studios with the assistace of sound engineer and producer, Alwyn Walker, will show everyone what we are capable of”.

The four songs which are a mixture of Indie rock against an urban backdrop are a fresh look at an everlasting theme. They show a songwriting ability and performance of a maturing group who now in their early twenties are ready for anything.

Backing vocalist and bass player Nicky Kilduff looks forward to further studio work and taking the band to the next level. He said he expects the youth and vitality of the band will be reflected in their current and future work.