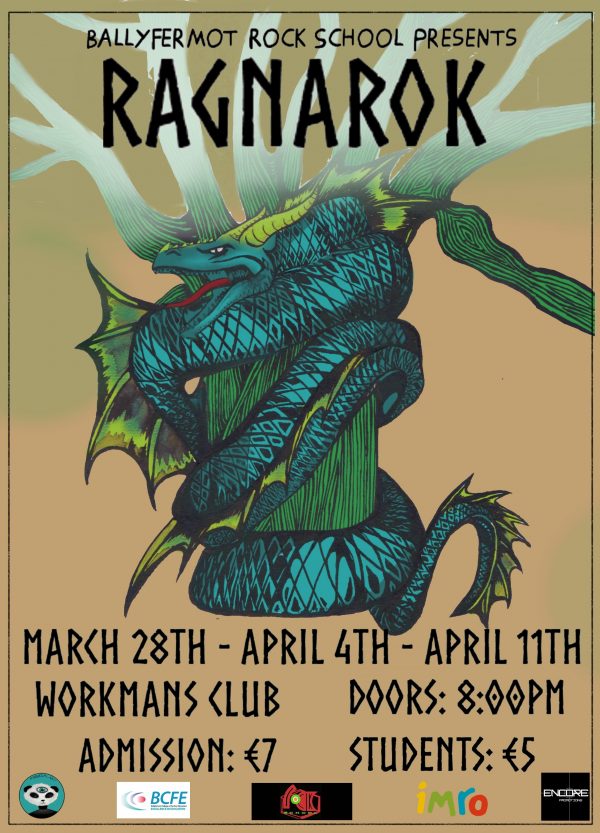 The Ballyfermot College Rock School students are set to take over the Workman’s Club on Dublin’s Quays this March and April for their annual end of year gigs. This year’s Rock School mini festival entitled “Ragnarok”, in honour of the Norse mythologies fabled ‘End of Times’. It is set to take place over three consecutive Thursdays – 28th March, 4th April and 11th April 2019.

The Rock School BCFE showcase gigs started in 1989 and since then have been held in venues throughout Dublin including Whelans, The Village, The Grand Social and now The Workman’s Club. The idea is to showcase up and coming original Irish songwriters and bands. Artists who have benefited hugely from these gigs in the past include Damien Dempsey, Mundy, Wallis Bird, Fiach Moriarty, Megacone, Junior Brother and many more. The gigs will be filmed to a professional standard by BCFE’s own TV students, giving each artist promotional footage to help them in their career development.

Speaking about this year’s festival, Vanessa Kelly, a student at BCFE Rock School said, “These gigs are a unique opportunity to showcase the talent that is growing and thriving in the creative community of Ballyfermot Rock School. This year we hope to provide three different musical experiences at each gig, in as many different styles as we can. I don’t think we can fully encapsulate how much it means for us to have a forum to share what we do with the general public. Everything you will hear at our gigs encapsulate our life experiences, our world perspectives, and being able to share that with an audience is an experience none of us will forget, and hopefully neither will you.”

The Rock School at BCFE is the original and most successful Contemporary Music Performance course in Ireland and one of the first of its kind in Europe. It’s aim is to prepare musicians for the professional music industry as writers, performers, instrumentalists, arrangers and producers. Vanessa added, “In my opinion, there’s something magical about the Rock School that you don’t find elsewhere. Together with our tutors, we create an atmosphere that promotes creativity. This creative atmosphere is very inspirational and feeds the songwriting process. There’s no better feeling than hearing crowds sing those songs back at you; it makes you feel unstoppable.”

With a mini-festival vibe and with music from a wide range of genres, Ragnarok 2019 promises to be an exciting series of gigs with almost 100 original Irish songs being showcased by original Irish artists over the three nights.