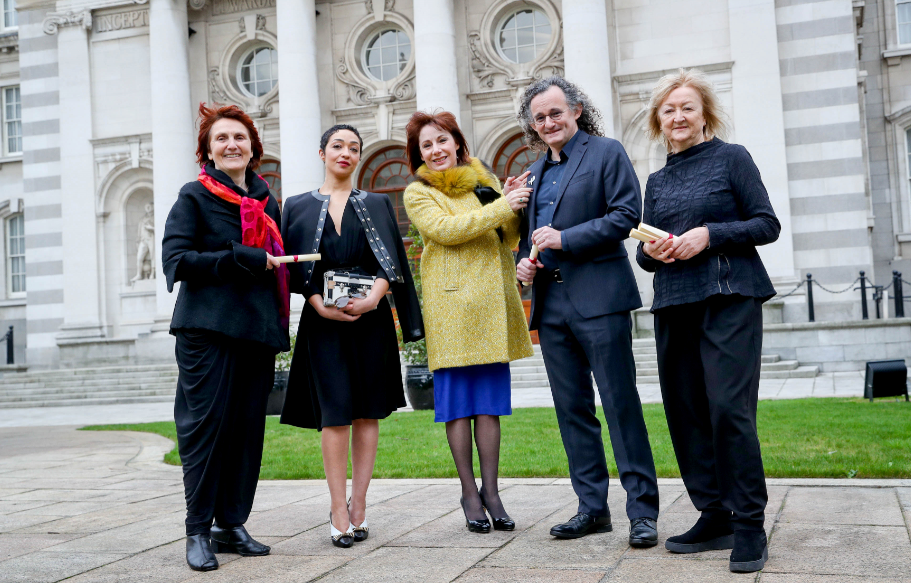 The Minister for Culture, Heritage and the Gaeltacht, Josepha Madigan T.D., today announced the appointment of five Cultural Ambassadors. The new positions will see high-profile figures from Ireland’s arts and culture community promote Ireland globally as part of the Government’s Global Ireland 2025 initiative.

Global Ireland 2025 is aiming to double Ireland’s footprint globally by 2025 though a mix of actions in the cultural, diplomatic, business, education and tourism areas. Ireland’s strong reputation for culture and creativity is central to the initiative, which proposes a number of actions to enhance the promotion of Ireland’s culture globally, including the appointment of Cultural Ambassadors.

Master musician and founding member of The Gloaming, Martin Hayes, leading architects, Shelly McNamara and Yvonne Farrell of Grafton Architects, awarding winning actress Ruth Negga and Pulitzer Prize winning poet Paul Muldoon have all accepted the role of Cultural Ambassador for a period of three years. The Cultural Ambassadors will endeavour to raise the public focus on arts and culture as a means of promoting Ireland globally, provide advice and input on strategic cultural initiatives and participate in key events and projects.

In announcing the appointment of the Cultural Ambassadors, Minister Madigan said: “Ireland’s artists have been outstanding ambassadors for the country, since the era of the creative genius of Shaw, O’Casey, Synge, Yeats and Beckett. The current generation of musicians, actors, architects, poets and other artists are continuing this invaluable work. They are the people that set our small island nation apart, the storytellers who convey Ireland’s story in a unique and memorable way, be it through word, music or design. We greatly appreciate each Cultural Ambassador’s acceptance of the role. In continuing to do what they do best, they will be among Ireland’s greatest representatives globally.”

“This Government understands the importance of culture and is committed to supporting it. This is why the Taoiseach has committed to doubling funding levels for culture, heritage and the Gaeltacht by 2025. The announcement of €1.2bn in capital funding for these areas last year and the significant increase for current funding for the arts in Budget 2019 are proof of this.”

The first event, which will be attended by a number of the Cultural Ambassadors, is a conference of cultural stakeholders being held in Dublin on 24 January which will discuss and debate how best to advance Ireland’s global visibility and strengthen global relationships.

Further appointments of Cultural Ambassadors may be made over time in line with the Government’s geographic and other priorities.

The Minister presented the four attending Cultural Ambassadors with a silver emblem by silversmith Seamus Gill to mark their appointment.  The emblem is based on the treasured boat of the Broighter hoard held in the National Museum, on which the Culture Ireland logo is modelled. Paul Muldoon, who could not be present owing to the commitments in the US, will be presented with his award at the end of the week in the Irish Arts Centre in New York when the Minister visits the city.