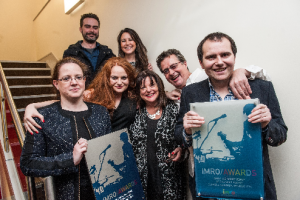 The award for National Live Music Venue of the Year 2014 (via public vote) went to Dolans, Limerick.

Of the annual awards voted by over 10,000 IMRO members, Keith Donald, IMRO Chairman said  “This is our annual chance to give a really big thank-you to promoters and venues across the country. The work they do is invaluable, as young bands and artists can’t build up an audience without them”.

Other winners in the regional categories include:

Performances on the night came from The Minutes, Lethal Dialect and Jack O’ Rourke.

He said: “Live music is more important than ever for musicians and bands – so it is crucial they have the best possible venues to play in. The IMRO Live Music Venue Awards are a fantastic platform for recognising all of the amazing work that is happening all over Ireland, in creating those essential opportunities for musicians.

“Great venues are really important in creating scenes and both 5th On Teeling in Sligo and Whelan’s in Dublin – who are the recipients of a special Lifetime Achievement Award from Hot Press to mark the end of their 25th Anniversary celebrations – fit that description perfectly.

“The overall winner of the Hot Press Live Music Venue of the Year is 3Arena, in Dublin, which of course was refurbished and rebranded during the year. 3Arena is widely recognised in the business as one of the greatest music venues in the world. It has brought the presentation of live music to a new level of sophistication here, setting standards that the whole live music industry in Ireland can both benefit and learn from. They are hugely deserving of this accolade.”