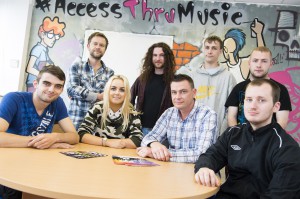 #AccessThruMusic is a course designed to engage, inspire and motivate NEETs aged 16 to 24. The course is part of Armstrong NI’s Prepared to Work Project.

But that’s not all it does; we build valuable life skills, teamwork, presentation skills, interview techniques and employability skills to help the NEET young people into employment.

How do we do it? We have devised a creative and unique way to engage young people using music and the music industry. We are supplied with tracks and songs from Universal Records for artists they have signed but with material not yet released. Our young people have to listen to the music and work in a team to come up with a marketing campaign for the artist as well as booking a mock European tour and write press releases and manage complex touring budgets to allow them to learn valuable literacy, numeracy and ICT skills.

Does it work? This project has engaged over 90 young people in its first year and two thirds of those are now in education, vocation training or are now employed. That’s a staggering statistic and goes to show how the course can help to reduce the increasing problem of NEETs in Northern Ireland.

Why don’t we celebrate this success? – We are doing just that!

On Friday 4th April AccessThruMusic takes over the Limelight.

In the afternoon we have an invitation only event to present those who completed the course over the past year with a certificate. This presentation ceremony will be opened by Dr. Stephen Farry MLA, and the Minister for the Department for Employment & Learning. Some past participants will be called up to speak about their experiences and the presentation will be hosted by DJ Philly Taggart, a BBC Radio One DJ from Northern Ireland himself. Also on stage will be Conor Scott who appeared on last year’s series of TheVoiceUK. Conor will be chatting about his experience as a guest speaker who came in to see the young people whilst on their course. Conor will also be performing at the presentation which is followed by a complimentary buffet and networking opportunities.

From 7pm to late the young talented people who have completed the course are staging their own event. The event has been organised by a youth committee who will also run the event on the night. Performing at this one off FREE gig will be a number of past participants along with some of the music industry advisers who mentor the young people throughout the project. This is a chance to showcase the talent that has come through the course and it will be attended by Record Labels and Publishers as well as people from the music industry. Runaway Go, who already attract a large following have been invited to perform as special guests to headline the live acts. The Showcase begins at 7pm with acoustic sets from participants such as Kat Little and Andreia Soares. After this the indie rock band, Echo Raptors, will perform a set as their front man Philip Rainey was one of the first to participate in the project, after Runaway Go will be a Hip Hop Hour hosted by Michael Johnston aka Eros the Prince. Since completing the course Michael has been signed by a London based Management Agency, Titans, and now hosts his own hip hop show weekly in Alley Cat. Young DJs and Music Producers who attended the course will then battle it on stage as EDM takes over in a number of DJ battles before DJ Paul Hamill of Psycatron, one of the project’s mentors and an internationally renowned DJ ends the night.

This will be a fantastic night and a great mix of music to showcase the emerging talent that has come from the AccessThruMusic course and prepared to Work project, which is funded through The Department for Employment and Learning and part funded by The European Social Fund. With FREE entry on the night this is one gig not to be missed and is a testament to the young people of Northern Ireland.