International Confederation of Societies of Authors and Composers CISAC Meets in Dublin. 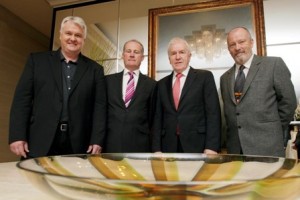 7th June 2012 – The urgent need to adapt copyright legislation to help safeguard the rights of owners of creative works was among the issues being discussed in Dublin today at a meeting of the General Assembly of the International Confederation of Societies of Authors and Composers (CISAC). Also top of the agenda was the review of theCISAC Professional Rules governing the 232 authors’ societies worldwide, as well as the development of a Global Repertoire Database (GRD) that would serve as a centralised, authoritative source of the metadata used to describe musical works. The Assembly, which is meeting inIreland for the second time, is being attended by approximately 150 creators and senior delegates representing three million creators from 232 authors’ societies, including music, film, visual arts and writers in 121 countries.

CISAC members meet annually to discuss a variety of topics impacting on creators and collective management of their rights. The vast majority of the societies attending the Assembly are not-for-profit organisations set up by and governed by creators in various territories worldwide. The Irish Music Rights Organisation (IMRO) which administers the performing right in copyright music inIrelandon behalf songwriters, composers and music publishers is hosting this year’s event.

Advances in technology and in particular the growth of the internet over the past 10 to 15 years have resulted in enormous upheaval in the area of copyright. One of the consequences of this upheaval has been the difficulty experienced by creators in receiving a fair commercial return for the use of their work by others. In many territories existing copyright legislation has failed to keep pace with these changes while in other cases, changes to legislation have left creators even more vulnerable to exploitation.

Kenth Muldin, CEO of STIM (Swedish Musical Society) and Chair of the CISAC Board of Directors said; “The entire creative community gathered today at CISAC General Assembly paid a moving tribute to its President Robin Gibb, who died just a couple weeks ago after fighting a long-term illness. We all missed his presence today. Robin has been our President and the voice of CISAC for the past five years and throughout this period we have been blessed by his presence and his infectious enthusiasm. He took his role very seriously – we knew we could count on him whenever the principles of authors’ rights were under attack”.

Olivier Hinnewinkel, CISAC Director General, added: “Holding the CISAC General Assembly in Ireland today is the perfect timing as the Irish Government is currently reviewing copyright legislation here. Authors’ societies worldwide, and through their international umbrella organisation CISAC, are constantly improving the business and technical solutions to easily and efficiently provide access to the worldwide creative repertoire for all users. However, fair remuneration for the uses of creators’ works and effective copyright protection are necessary to foster the development of the creative economy”.

Jimmy Deenihan, T.D. Minister for Arts, Heritage and the Gaeltacht, who addressed the Assembly said; ”The Government is strongly committed to reviewing and updating copyright legislation in order to strike the right balance between encouraging innovation and protecting creativity. The Copyright Review Committee, an independent committee established by my colleague Minister Bruton, is carrying out an extensive review of the current copyright legislative framework and has recently published a wide-ranging consultation paper on the issue.

The Committee has invited further submissions from all affected or concerned by the issues raised in the Paper including information providers and ISPs, innovators, rights-holders, consumers and end-users.  This consultation process is due to end on 29 June, 2012 so I would strongly encourage all interested parties to actively engage with the work of the Copyright Review Committee in the coming weeks”.

Victor Finn, CEO, IMRO said; “It is appropriate that Ireland is hosting an event like the CISAC General Assembly as creatives in Ireland have played an important role nationally and internationally for many generations. The success of Irish music creators, film makers and writers on the international stage has contributed significantly to the positive and vibrant imageIreland enjoys throughout the world. The diversity and quality of creativity inIreland is the most important ingredient in fostering our reputation as a dynamic and culturally rich nation.”

Today’s meeting is the first coming together of CISAC member societies since the untimely death of CISAC President Robin Gibb on May 20, 2012. Mr Gibb had served as CISAC President since June 2007. Mr Gibb, who was part of one of the most successful songwriting teams in the history of pop music, was a passionate advocate of collective rights management and a proud President of the CISAC. He enthusiastically used his position as President of the organisation to persuade global policy makers to support creators and promote and uphold the value of copyright.  French visual artist Hervé di Rosa, Vice-President of CISAC since June 2010, will serve as President of CISAC until the end of the mandate in June 2013.

CISAC– the International Confederation of Societies of Authors and Composers –  is the leading worldwide network of collective management societies protecting and promoting the interests of creators and rights holders. In a globalised and digital world, CISAC’s main missions are to provide highest business standards to protect creators’ rights, to reinforce the international network of authors’ societies, to be their spokesperson in all international debates and to reassert creators’ inalienable right to live by their creative work.

With 232 authors’ societies from 121 countries as its members, CISAC indirectly represents around 3 million creators and publishers of artistic works in all genres including music, drama, literature, audiovisual, photography and the visual arts.

As an international organisation, CISAC’s fundamental role is to enable authors’ societies to seamlessly represent creators across the globe and, in particular, to assist them in ensuring that royalties flow to authors for the use of their works anywhere in the world. In 2010, the royalties collected by CISAC’s member societies in their respective national territories topped 7.5bn EUR.

Founded in 1926, CISAC is a non-governmental, not-for-profit organisation with worldwide headquarters inFrance and regional offices in Chile, Hungary, Singapore and South Africa.