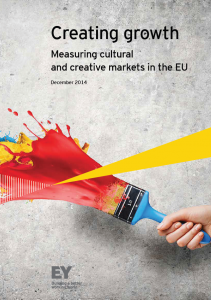 A new study published by EY (formerly Ernst & Young) and presented today to Commissioner Oettinger, Commissioner Navracsics and Vice-President Ansip shows that cultural and creative industries are among the EU’s biggest employers and have experienced sustained growth even through recession.

The EY study published today emphasises that creative works are one of the main sources nourishing the digital economy, which has been placed at the forefront of the European Commission’s future policy plan. Jean-Noël Tronc, CEO of French authors’ society Sacem, commented that “The creative and cultural sectors are an integral part of the digital economy. Creative works are instrumental in the value generated by the digital networks and platform”.

At a meeting later today with European Commissioner for Digital Economy and Society Günther Oettinger, Commissioner for Culture, Youth and Sports Tibor Navracsics, and Vice-President Andrus Ansip, the European Grouping of Societies of Authors and Composers (GESAC) and its partners for the study[1], will invite EU politicians to give the necessary consideration to the importance of creators who provide the life blood of the creative and cultural industries and the digital economy.

Christophe Depreter, President of GESAC, said “Today’s study shows that the creative and cultural industries create 5 times more jobs than telecommunications and far more than conventional sectors like chemical, automotive and metal and steel industries. We are in the information age and creative works are the main source of its digital economy. Creators need to be at the centre of EU policy on authors’ rights/copyright that would also feed a more diverse and future-proof digital economy.”

In light of the modernisation of copyright recently set as one of the JC Juncker Commission’s priorities, Jochen Greve, the German screenwriter of renowned TV Series Tatort, and patron of the SAA said “this study shows what I experience on a daily basis. As I work together with my fellow creators, sharing our ideas and putting our stories together, we are also laying the foundations for the jobs of many other people who bring our stories to the screen and then make sure it reaches as many people as possible around the world. All of the subsequent economic and social value that is created from our ideas comes from our authors’ rights.”

Also arguing in favour of maintaining a healthy copyright system to allow for the cultural and creative sectors to continue to blossom in Europe was Henrique Mota, CEO of Portuguese publishing house Principia Editoria and Vice-President of the Federation of European Publishers (FEP): “Without copyright, there would be far fewer books, and therefore creative expressions would significantly be stifled. Copyright preserves cultural diversity, and with it a European identity deeply-rooted in its versatility.”

The comprehensive study by EY “Creating Growth: measuring cultural and creative markets in the EU” which analyses 11 sectors of the cultural and creative industries (CCIs) throughout the EU28, demonstrates the major contribution of these sectors to growth and jobs in the European Union. Representing €535.9 billion in turnover and more than 7 million jobs, CCIs show an impressive economic weight, but also specificities that provide guiding material for the rest of the EU economy:

– CCIs also attract young workers who are especially hard-hit by unemployment in the EU: they account for over 19% of those working in CCIs.