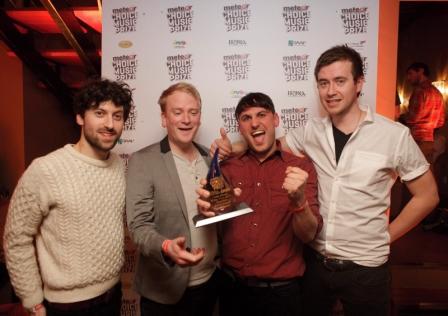 Delorentos are the winners of the Meteor Choice Music Prize Irish Album of the Year 2012, in association with IMRO and IRMA, for their third album, “Little Sparks”. Accepting their award last night in Vicar Street, the guys paid tribute to the wealth of talent in the music scene in Ireland.

The judging panel made up of 11 Irish music media professionals deliberated at length to choose the album which represented the best of Irish music from the shortlist of 10 records released by Irish artists throughout 2012. Instead of using sales or airplay as criteria, the Meteor Choice Music Prize judges focus, simply and solely, on the music.

The winner of the Meteor Choice Music Prize Irish Song of the Year was also announced. Gavin James won the prize for “Say Hello”, decided by the public via text vote and online through Meteor’s Facebook page. The prize was presented to Gavin by Today FM’s Colm O’Sullivan and Carolann Lennon from Meteor.

Delorentos received a cheque for €10,000, a prize which has been provided by the Irish Music Rights Organisation (IMRO) and the Irish Recorded Music Association (IRMA) – as well as a specially-commissioned award provided by RAAP. The sold-out event in Vicar Street, Dublin featured performances by nine of the ten shortlisted acts. The event was hosted by Today FM’s Paul McLoone and was broadcast live on the station on Paul’s show as well as a live webcasts via Venue One.

The full shortlist of nominated albums was as follows (albums in alphabetical order):

Culture Ireland funded the attendance of key overseas delegates at the event.