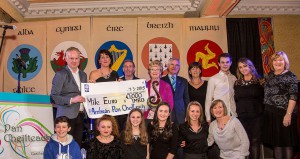 ‘Foireann Bhrí’, led by well-known songwriter Brighdin Carr, were a hugely popular choice with their song ‘Árainn Mhór’ at the Pan Celtic National Song Contest held in Carlow on Saturday night. The song was composed by Brighdin and delivered by singer Jason Ó Frighil supported by ‘Foireann Bhrí’ including a host of musicians and singers.

The song contest was sponsored by IMRO and Brighdin was presented with a cheque for €1,000 by Keith Johnson, Director of Marketing & Membership at IMRO. ‘Árainn Mhór’  will go forward to represent Ireland at the Pan Celtic International Song Contest in Derry on Thursday, 9th April.