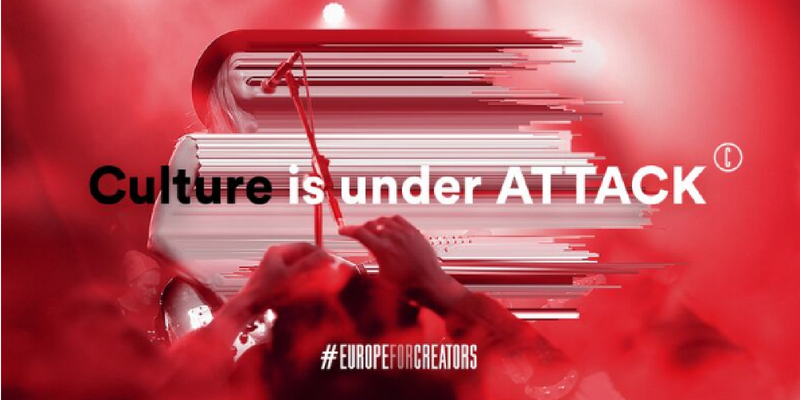 EUROPE FOR CREATORS, a coalition of citizens, creatives and organisations fighting in favour of the Copyright Directive, today launches a broad reaching movement, calling on citizens and decision-makers to take part in the debate and ensure that their voices are heard.

This campaign seeks to correct misinformation by explaining the issues at stake and the importance of a vote in favour of the EU Copyright Directive on September 12.

Educating and Mobilising Supporters to Close the Value Gap

Against a backdrop of astroturfing and a massive lobbying campaign, extensive education on this issue is urgently needed. Article 13 of the Directive will require Internet platforms to negotiate fair license agreements with copyright holders. This is the true issue is that many tech giants like Google or Facebook want to hide.

“Digital economic powers continue to profit as working artists struggle to make ends meet. The balance between the revenues generated by Internet Platforms and the money they give to the creators who are responsible for their success, is entirely distorted,” said Véronique Desbrosses, general manager, European Grouping of Societies of Authors and Composers (GESAC).

What Are the Issues at Stake?

1. Creativity. While the current debate has focused on “memes” and “Gifs,” these formats of creative expression are already protected by existing legislation and will not be affected by the new Directive.

3. Parity. Free internet platforms have taken advantage of a lack of legislative consistency. Similar online services do not have the same obligations. What is clear however: free streaming platform pay their content creators 10 times less than their subscription-based counterparts.

“The creative and cultural industry in the European Union represents €536 billion per year, more than the combined revenue of the automotive and telecoms sectors, and is responsible for 12 million jobs. We have enriched the lives of Europeans, and now we are calling on Europe to act,” added Desbrosses.

Launch of EUROPE FOR CREATORS

Today is just the first step in a massive mobilisation around the Directive. In the coming weeks, this coalition will unit organisations and supporters as well as motivate citizens across Europe to engage MEPs in the fight for the rights of all creators. Initial actions will include:

• An open letter that will be sent to all Members of Parliament to activate them in this fight
• Debates that will be organised across Europe on September 5th by the authors’ society and others, to educate citizens, artists and creators. These discussions will coincide with the release of the new text of the Directive.
• Striking events that will take place in key European cities before the September 12th vote.

EUROPE FOR CREATORS has launched a dedicated Website and Twitter handle to share information about the Directive and encourages supporters to spread the word. To learn more about EUROPE FOR CREATORS visit www.europeforcreators.eu or follow the conversation on Twitter @EUForCreators with #EuropeForCreators.

About EUROPE FOR CREATORS
EUROPE FOR CREATORS gathers citizens, creatives and organisations committed to fight in favour of the Copyright Directive.  Representing European creators and rights holders, including authors, composers, musicians, singers, painters, sculptors, directors, producers, journalists, writers, scientists and academics, responsible for the more than 12 million jobs associated with the Creative Industry.