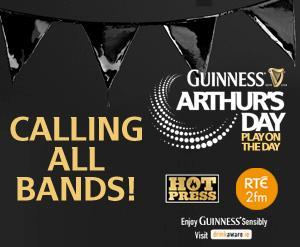 Guinness, in association with Hot Press and RTÉ 2fm, are offering Irish bands and musicians the opportunity to join the line-up for Arthur’s Day 2012. The national winner’s prize package for the Arthur’s Day – Play On The Day competition 2012 will include:

* An in-studio session for broadcast by RTE 2fm

* The release of a single, with no strings attached

The Play On The Day competition will form an integral part of this year’s Guinness Arthur’s Day celebrations. To enter, acts must submit a track at http://www.playontheday.com and then play a gig on Arthur’s Day.

The nationwide search, which covers the Republic of Ireland and Northern Ireland, is open to all contenders performing in any musical style or genre. The judges are looking for an act that will bring something extra special to their live performances, and who will also benefit most from the brilliant platform offered by the competition.

GUINNESS has significantly expanded the Arthur’s Day celebrations since last year to include live music events in local pubs across Ireland so whether you’re from Dingle, Derry or Dublin, it’s never been easier to take part in what is set to be no ordinary Thursday night.

Renowned artists such as Example, Tinie Tempah, Ellie Goulding, Mika, prolific UK rapper Professor Green, Fatboy Slim, Texas and rising star Amy MacDonald are set to take to the stage in local pubs all across Ireland. This year there are no tickets on sale, just grab some mates and head to one of 500 free Arthur’s Day music events taking place in local pubs across all 32 counties.

To enter, go to http://www.playontheday.com where you’ll be taken through the simple entry process!

For more on Arthur’s Day 2012 go to www.guinness.com or www.facebook.com/guinnessireland

To enter Play On The Day, all participants must be over 18 years of age. Enjoy Guinness sensibly. Visit drinkaware.ie.