The rise of music subscription services and the promising growth of emerging markets are among key highlights of IFPI’s Recording Industry in Numbers 2013, the essential statistical analysis of the recorded music market worldwide which was published this week. 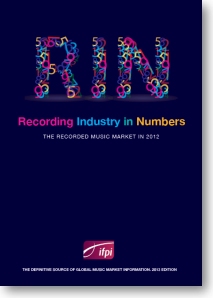 “Recording Industry in Numbers also reveals the sheer diversity of the modern music business. Notable highlights in this year’s edition are the increasing role of subscription services and the growing importance of emerging markets in driving the industry’s recovery.”

Among the finalised industry data published in this year’s edition:

Overall global recorded music trade revenues increased by 0.2% in 2012, the first year of growth since 1999. All the revenue streams IFPI tracks (physical, digital, performance rights and synchronisation revenues), with the exception of physical sales, increased in 2012. A total of 22 countries saw market growth in 2012, including nine of the top 20 markets.

Digital channels now account for 35% of overall industry trade revenues, while physical sales now represent 57% of record companies’ income. Downloads remain the biggest source of digital revenues, with combined unit sales of track and album downloads up by 11% in 2012.

Emerging markets are helping fuel the industry’s recovery. Brazil, India and Mexico have seen market growth respectively of 24%, 42% and 17% since 2008. In 2012 revenues in India reached an all-time high while Latin America was the fastest growing region of the year.

Albums continue to hold their appeal, accounting for 56% of recorded music sales value. Digital album downloads grew faster than singles and vinyl sales hit their highest point since 1997. Consumer usage on streaming services shows that the album format remains very relevant. Many of the year’s best-selling albums generated a large streaming volume across all tracks included on the album.

Sources of music licensing income are also on the rise. Performance rights revenues (from broadcasts and public performance) were the fastest growing sector in the recording industry in 2012, accounting for 6 per cent of recorded music revenues. Revenues grew by 9.4% globally, to US$943 million. Income from synchronisation deals – music used in TV adverts, films and brand partnerships – were also up. These grew by 2.1% to US$337 million in 2012.

Recording Industry in Numbers 2013 is free for IFPI members and can be purchased from IFPI’s website for non-members. Full details of packages and prices can be found here.