This evening, the first of two IMRO Showcases at Temple Bar TradFest will take place in the New Theatre, Temple Bar. Traditional groups, Tremolo and Réalta, will be kicking things off. The New Theatre is the venue for the second showcase, taking place tomorrow evening, followed by two masterclasses on Saturday afternoon.

Almost all events are now fully booked. For further details contact IMRO at ei.ormi@pihsrebmem or 01 661 4844. 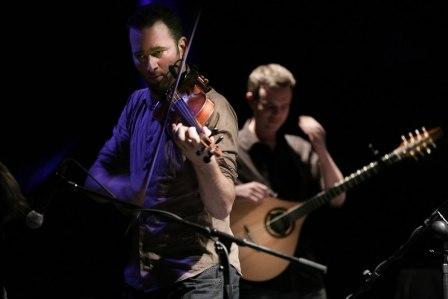 Tremolo consists of four accomplished musicians from the Irish traditional music scene, brought together by their shared taste in melodic, transparent music. Whilst remaining at all times innovative and refreshing, their technical ability never stands in the way of them remaining true to their collective musical passion.

Donall Donnelly is a talismanic fiddle-player who adds a dynamism and drive to the unique sound of Tremulo. Since becoming ‘Fiddler of Dooney’ champion he has gone on to tour worldwide, supporting bands like Capercaille, the Michael McGoldrck band and playing festivals ranging from Womad to Celtic Connections in Glasgow. Guitarist, Donncha Moynihan, infuses subtlety and warmth into everything he plays. Donncha is Cork-based and was a founding member of the much lauded traditional group Calico in early 1998 who went on to release two award-winning albums- “Celanova Square” and “Songdogs”.

Stijn Van Beek (uileann pipes/low whistle) performs in an eclectic range of bands. He has featured as a soloist on an album with tango bandoneonist Carel Kraayenhof playing compositions by Ennio Morricone and has played at major Dutch pop festivals with rock group ‘Moke’.  Making up the four-piece, Karl Nesbitt (bouzouki, flute and bodhran) has performed with some of the best musicians in Irish music in various majestic settings across Europe, the UK and China. He has carved out a reputation for himself as a band arranger and for two years in succession in Brittany, he organised and orchestrated the music for a band representing Ireland at the Festival Interceltique in L‟orient. 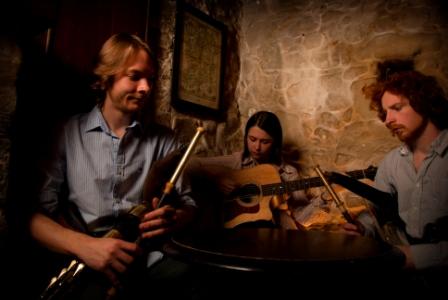 Belfast based band Réalta have launched onto the Irish music scene with their lively, exciting and unique approach to Irish traditional music. Performing on dual uilleann pipes, whistles, guitar, bouzouki, vocals and bodhrán, this multi instrumentalist group make full use of the intricate melodies and driving rhythms that make Irish music so loved throughout the world.

Having toured Germany alongside Altan in 2011 and won the prestigious Danny Kyle Award at Celtic Connections 2012, these young musicians have earned a reputation for delighting audiences as they present an enchanting programme of dance music interspersed with the occasional story, air and song.