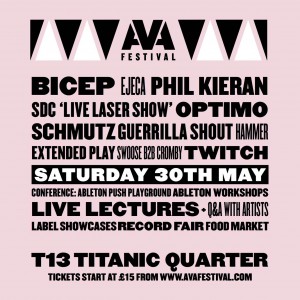 has teamed up with a range of Belfast locals including Matthew McBriar and Andrew Ferguson (Bicep), Oisin O’Brien (Guerilla Shout), Generator NI and many more, to produce AVA (Audio Visual Arts) Belfast, a one day-&-night grass roots festival and conference that celebrates and amplifies the strong current of electronic music and digital visual arts that has emerged from Northern Ireland.
Merging an old industrial warehouse-come-skate park (T13) with both established and emerging Electronic Music Producers, DJs & Visual Artists, this project shall pay homage to Northern Ireland’s unique energy and character. It will celebrate the talent that has been produced, whilst inspiring and developing the next generation.

Amongst the headlining names confirmed for 2015, are the long-time procurers of the famous ‘Feel My Bicep’ blog, the Belfast DJ/Producing duo ‘Bicep’, coupled with the highly eclectic half-Irish-half-Scottish DJ duo ‘Optimo’; the long-standing Irish veteran that is ‘Phil Kieran’; the reputable purveyor of high quality house and techno ‘Ejeca’; along with the inter galactic ‘Space Dimension Controller’, with his NI debut of the SDC Live Laser Show.
There will also be sets from Schmutz, Swoose & Cromby, Extended Play, Twitch and Visuals from GUERILLA SHOUT (Oisin O’Brien, Daniel Holmes and Kristian Glenn).

AVA aims to be more than a festival. The goal is to provide an opportunity for emerging and established artists, labels, designers, promoters and some very special guests, to share their knowledge through a free daytime conference (11.00-16.00) that progresses into the AVA evening showcase (16.00-Late).
Nothing like this exists in Northern Ireland and with a limited early bird price tag of just £15 per person for AVA Festival; it is set to sell out quickly.

Speaking on the festival, Bicep have said:
“When Sarah (Up Productions) brought the concept to us back in April 2014, we knew it was something that had to happen. Having played at festivals around the world, we wanted to support the development of a strong electronic festival in Belfast. Getting all the talent together and back in the city and in one incredible warehouse space down at the docks, with a supporting conference is going to be pretty special.” (Bicep).