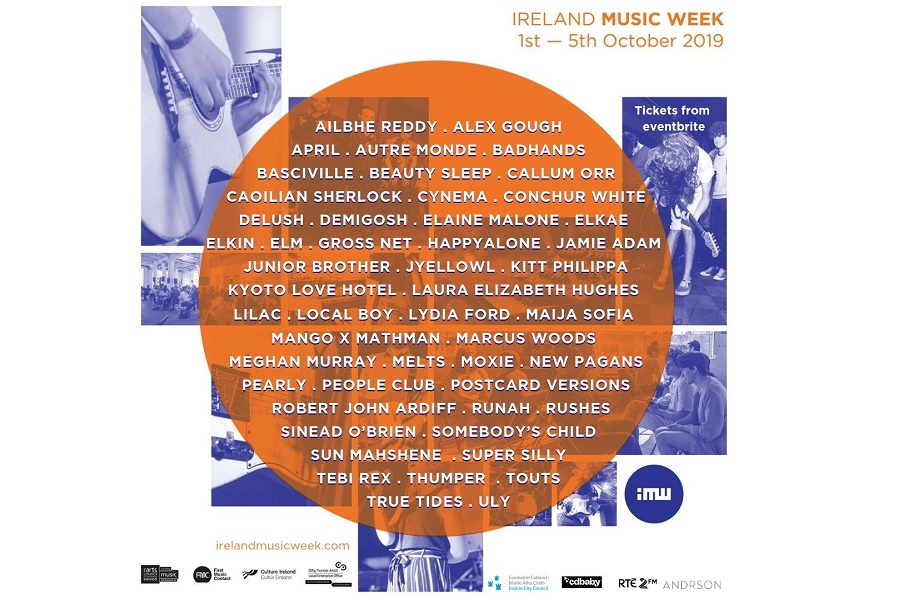 Ireland Music Week are delighted to announce the 50 acts that will showcase at IMW19 as just revealed on the Tracy Clifford Show, RTÉ 2FM, the festival’s media partner.

The festival made the annual call in May for artists to apply and over 500 acts applied via First Music Contact’s platform Breaking Tunes and were chosen independently by both international and Irish music industry professionals.

Ireland Music Week places a strong focus on export-ready artists and the success rate year on year from the showcases has been remarkable.

“The overwhelming feedback from our 8 Irish and over 30 International judges was the level of competition in this year’s applications. Year on year our judges remark on the quality of Irish bands in a global and not just local context. That is beyond encouraging to hear especially for all those who applied as well as the 50 who will showcase in October “ Angela Dorgan, CEO FMC

This year Andrson and CDBaby have come on board as industry partners with more exciting details on their involvement to be released in the coming weeks. They join long-standing supporters The Arts Council, Culture Ireland and DCC Local Enterprise Office.

Tickets via Eventbrite are priced as follows (excluding charges)

Single Venue Showcase €12.50 (only available on the door at the venues)

Tuesday, Wednesday and Thursday will see dedicated B2B conference elements to facilitate the needs of the newly formed FMC-founded AIM Ireland, along with other offerings from new strategic partners introducing new audiences for Irish music around Europe as well as more networking and masterclasses to be announced closer to the dates. On Thursday, a targeted networking event will take place in Lost Lane, where international delegates will be invited to network with their Irish counterparts and artists attending the conference. The live showcases will take place across Friday and Saturday, the 4th and 5th of October.

This will be Ireland’s largest gathering of bookers, labels, managers, music supervisors, radio folk and journalists from around the world and here at home. The 5-day event will see a mixture of workshops, discussions and panels which are growing in importance year on year for artists across all levels to meet with people one-to-one who can them along their career in the industry.