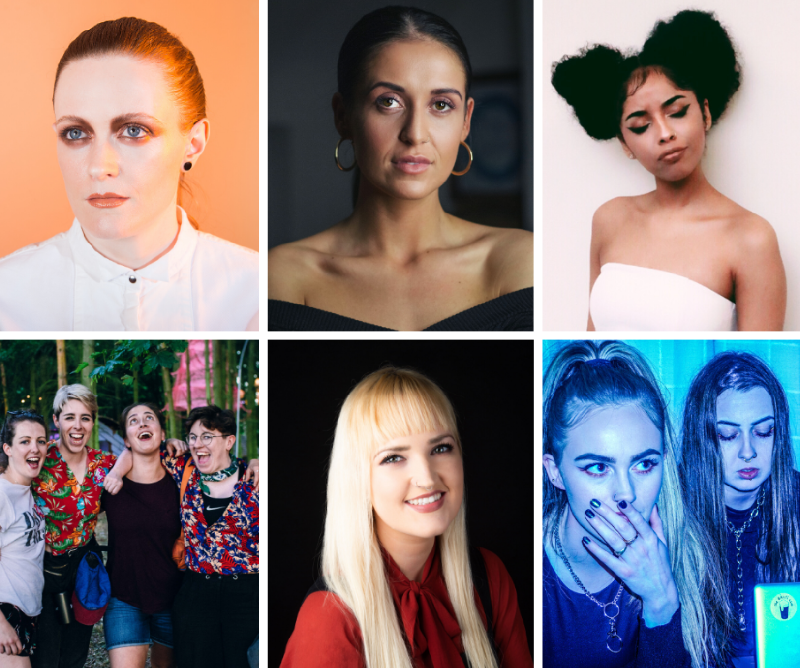 74 artists and music industry professionals from 12 different countries have been selected by industry and export experts as the future leaders that will take part in the Keychange development programme in 2020, after an open call that received over 650 applications. In Ireland, the Keychange partner festival is Ireland Music Week and IMRO are the sponsor.

Launching with a full network meetup in Stockholm on February 13th, this extensive programme led by Reeperbahn Festival in partnership with PRS Foundation and Musikcentrum Öst will give the 74 women and gender minority participants all the skills and opportunities they need to get to the next stage in their career. This is the first of three cohorts that will take part in the ambitious and future-facing four year programme that was announced in Summer 2019, when Keychange was awarded €1.4m from the Creative Europe programme of the European Union.

Alongside the full network meet-ups and mentoring, participants will take part in a ‘Creative Lab’ at one of the 13 festivals that are partnered with Keychange (Ireland Music Week in October). The Creative Labs will offer showcasing opportunities to Artists, public speaking opportunities to Innovators, plus workshops, seminars, studio sessions, masterclasses and more. International collaboration lies at the heart of the programme, and Polish company Chimes have been recruited to oversee all training.

Eleanor McEvoy, IMRO Chairperson said “International collaboration is essential to the creative and business development of all talented artists and the music industry’s future success. Enabling more women access to international networks and new markets at critical stages in their career will help them realise their potential as future leaders of an industry that is ready for and will benefit from change.  Right now we have an opportunity to respond and commit to tangible change within the music industry.  Our hope is that this will be the start of a more balanced industry which will result in benefits for everyone.”

The announcement comes at an exciting moment for Keychange; the number of organisations that have signed up to the gender balance pledge has passed 300 and Talent Norge (Norway), Norsk Tipping (Norway) and Musicians’ Union (UK) – who have lead important research and resources for cases of harrassment, discrimination, and abuse of power – have joined the movement as Sponsors.

Canadian partners FACTOR, SOCAN Foundation, and festivals MUTEK Montreal and BreakOut West are the first outside of Europe to commit to the talent development element of the Keychange programme. Canadian artists and music industry professionals will get access to international opportunities and progression routes that would not be available to them otherwise, as well as training and participation in a valuable network. Many Canadian festivals have signed the Keychange gender pledge, and the investment into individual development is an concerted step towards meaningful and long lasting change for the Canadian music industry.

A core value of Keychange is to break down the barriers that people face because of their gender, and from listening to the feedback from the 2018 edition of the programme, the new team put a specific budget in place to support all childcare needs. Therefore, in this first year of 2.0, Keychange has pledged a percentage of their funding to the participants, specifically for childcare, in order to facilitate their participation in the programme, and ultimately aid their development.

Christina Schäfers, Keychange Lead and Head of Reeperbahn Festival’s programmes in arts, word and film says, “The Keychange talent development programme lies at the core of the initiative. While the pledge encourages organisations to book diverse talent, we’re helping the talent get to their stages. Following dialogue with many creators and experts during phase one, we are particularly pleased that a more inclusive approach to recruitment has resulted in a very diverse and exciting group of participants for 2020. We are proud to represent many more gender minority participants and a diverse range of ethnicities, genres and career levels.The Keychange team are busy creating a meaningful and impactful capacity building programme, and we’re looking forward to working with them all, and to seeing what they do next. We can’t wait to host this incredible cohort at the full network meet-ups in Stockholm and at Reeperbahn Festival.”

60 participants took part in the Keychange programme in 2018, including Poppy Ajudha, who has since been named as one of Barack Obama’s favourite artists, Kat Frankie, who was nominated as ‘best producer’ at the notorious ‘Preis fur PopKulture’ awards in Germany, Harriet Moss who has been promoted to Managing Director of publishers Manners McDade, and IMAN, who has written a multi-million streamed track with Zara Larsson.

Keychange is a pioneering international initiative which transforms the future of music whilst encouraging festivals and music organisations to achieve a 50:50 gender balance by 2022. 74 emerging artists and innovators each year from across Europe and Canada will take part in international festivals, showcase events, collaborations and a programme of creative labs. Keychange aims to accelerate change and create a better, more inclusive music industry for present and future generations.