The IMRO Radio Awards Hall of Fame is a highly regarded accolade in the Irish industry and the four new inductees join names such as Gay Byrne, Larry Gogan, Ian Dempsey, Áine Lawlor, Candy Devine and Tony Fenton amongst others. The Hall of Fame celebrates those well-known names and those behind the mic that make Irish radio such an integral part of daily life.

Sean Murtagh, Chairperson of the IMRO Radio Awards Committee said “the Hall of Fame was established to pay enduring tribute to not just the well-known Irish radio personalities but also to those who worked quietly behind the scenes helping to make Radio in Ireland great. Today’s inductees are very worthy recipients of this accolade and held in the highest regard by their peers.”

“We are delighted to induct four of the most respected radio professionals on the island of Ireland into the IMRO Radio Awards Hall of Fame.  Each of them in their own way has made an indelible mark on the broadcasting sector and they rightfully deserve to take their place alongside the many other great Irish radio luminaries who have been honoured by their peers over the years.” Eleanor McEvoy, IMRO Chairman.

Speaking at the event, Professor Pauric Travers, Chairperson of the BAI said “since its establishment, the Hall of Fame has marked, in a meaningful and personal way, the level of esteem in which those who are honoured are held by their peers.  In their various and unique ways, each inductee reminds us why it is that Irish radio continues to engage, inform and entertain listeners, reflecting their passions, interests and concerns”. 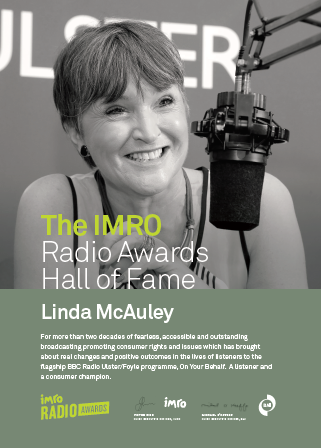 For more than two decades, Linda McAuley has been BBC Radio Ulster’s and Northern Ireland’s de facto Consumer Champion: the friend to which thousands of listeners turn to solve their problems, big or small.  When all else fails, Linda and ‘On Your Behalf’, the programme she’s hosted continuously since its launch in 1995, will get it sorted, or their questions answered and voices heard. She is, as far as the audience is concerned, a one-woman dynamo, campaigner, wrong-righter, social service and broadcasting institution.

Linda’s radio career has spanned both commercial and BBC stations, from reporting and hard news to magazine and consumer programmes. She first joined BBC Radio Ulster in 1978 as presenter of the evening drive time programme ‘Change Gear’ and returned in 1989 to present ‘Morning Extra’. In 1995, she helped launch the station’s first dedicated consumer affairs programme, ‘On Your Behalf’, remaining through various refreshments and formats to make it the flagship Saturday morning show it is today, blending consumer advice, information and education with robust confrontation of unfair trading.

Linda and her programme have brought about real changes in the real lives of BBC Radio Ulster’s listeners, from industry wide initiatives to standardised travel insurance terms for those booking flights in Belfast but leaving from Dublin to forcing big name retailers to adopt a more transparent and fair approach to online services and deliveries to NI residents.

Linda is one of those rare presenters – someone who is perfectly matched to her role and her programme.  Every week, public service broadcasting is turned into a riveting radio listen, helped by a brilliant and deceptively effortless broadcasting performance. More than 20 years after she started, she’s still serving audiences stronger than ever: a listeners’ as well as a consumers’ champion. 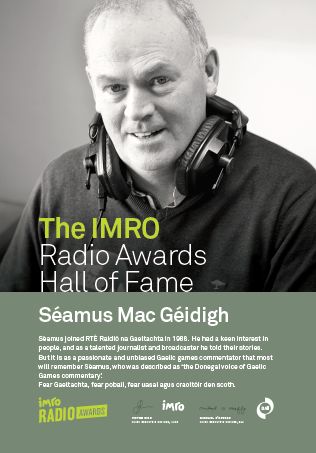 Séamus Mac Géidigh: In Irish, the term ‘fathach fir’ is used to describe a person who is out of the ordinary, a man amongst men.  Séamus Mac Géidigh, who passed away suddenly on 4 July 2016 at the age of 54, was one such man.

He was a highly-respected journalist and broadcaster with RTÉ Raidió na Gaeltachta and was manager of the Doirí Beaga offices and studios in Donegal. Séamus, who was from Gort a’ Choirce in the Donegal Gaeltacht, began his working life as a broadcaster when he joined RTÉ Raidió na Gaeltachta in 1988. During his thirty years with the organisation he fulfilled a variety of roles. But it is as a passionate, unbiased and informed Gaelic games commentator that most listeners will remember Séamus, who was described as ‘the Donegal voice of Gaelic Games commentary’. 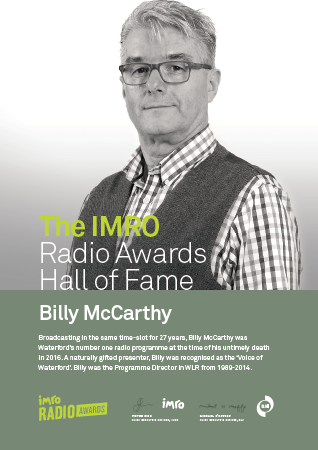 Billy McCarthy: Billy, who died after a short illness in November last, made a phenomenal contribution to the radio industry in Ireland, not only at board level in WLR for many years but particularly as ‘the voice of Waterford’ in his 27 years as presenter of the highly rated ‘Deise AM’. A former Director of WLR, Billy served on the board for over 10 years, during which time WLR built Ireland’s first purpose-built radio station outside of RTE in Dublin. Presenting, however, was Billy’s first and real love and it was as a current affairs broadcaster that he ranked amongst the very best. In the 10 am-12 noon weekday slot, his ‘Deise AM’ show was consistently the most listened to radio show in Waterford (JNLR) for a staggering 27 years, from 1989 right up to Billy’s untimely death last November.

Taoiseach Enda Kenny gave his first radio interview to Billy in WLR on the morning after he made controversial comments about “whingers” in his home town of Castlebar. Those comments, many feel, may have been the turning point of that election.  In that interview Billy challenged the Taoiseach on his comments and the audio was used nationwide in news coverage that day. In that same interview, meanwhile, Billy received a commitment from Enda Kenny on abolition of the Broadcasting levy.

Billy’s untimely death in November, at the young age of 62, sent shockwaves not only through the radio industry in Ireland but his beloved Waterford city and county.  The massive outpouring of grief from listeners to WLR FM in the days after his death illustrated just how important a figure he was to many; an integral part, indeed, of the daily lives of thousands of Waterfordians. President Michael D. Higgins, Taoiseach Enda Kenny and political leaders of all parties sent their personal condolences on news of his death. Billy is deeply missed his partner Des O’Keeffe, his mother Kay, his sister Celine, brothers Declan and Ronan and his extended family, relatives and many friends. 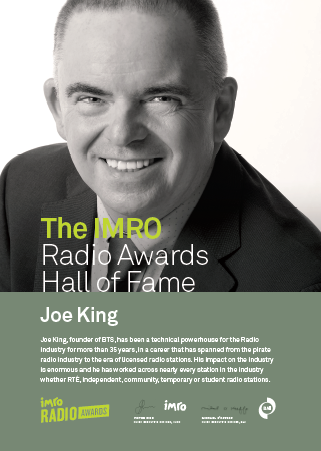 Joe King:  Joe King is the founder of BTS and has been a technical powerhouse for the Radio industry for more than 25 years, in a career that has crossed from the pirate radio industry to the era of licensed radio stations. His impact on the radio industry is well documented and he has worked across nearly every station in the industry whether RTÉ, independent, community, temporary or student radio stations. It is true to say that there isn’t a radio station in Ireland which hasn’t worked with Joe King at some stage of its radio life.

Joe is always at the end of the phone to solve transmission problems for radio stations the length and breadth of the country regardless of whether it’s the middle of the night, early in the morning or the end of a long day. He is more likely to be found half way up a mountain fixing problems for a radio station experiencing dead air than behind a desk. He has worked knee deep in snow, battered by high winds and soaked by heavy rain to get radio stations back on the air.

As a technician and engineer Joe is never to the forefront in radio but that exactly who the Hall of Fame Award sets out to honour. Joe’s dedication to radio is unquestionable, he’s a radio anorak and a professional, and is always updating his knowledge to ensure the industry has the technology to grow and innovate.

Hall of Fame Inductees to date: