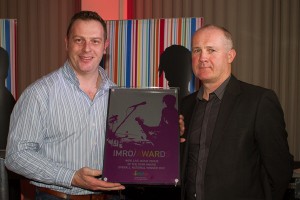 Scooping the biggie of the night – the award for National Live Music Venue of the Year (via public vote) for the first time was Galway’s ever popular live music venue, Monroe’s. .

The annual awards, voted by over 8,000 IMRO members, recognises the dedication and passion of those who work in Ireland’s live music venues, providing the public with an exceptional live music experience, week in, week out.

Other winners in the regional categories include:

Also nabbing accolades for IMRO Festival of the Year and IMRO Best Small Festival were Electric Picnic and Live @ The Marquee Cork respectively.

Performances on the night came from Daithí and The Rubberbandits with a special presentation included in the ceremony for IMRO’s 9,000th member, singer songwriter Liza Flume, who performed two songs for guests.

Of the awards, Victor Finn, CEO of IMRO said “An extensive and vibrant venue network is the lifeblood of any strong live music sector. These awards acknowledge and applaud those venues and festivals throughout Ireland that excel in creating a memorable and exhilarating environment for music fans and performers alike. We would like to congratulate all of the winning and nominated venues and festivals and pay tribute to the contribution that they make to local communities from a cultural and economic perspective.”

Hot Press Editor Niall Stokes also gave special mention to their readers poll winners, which noted the Set Theatre Kilkenny and Cork Opera House as leading venues with the O2 Dublin taking the main prize. He said “Live music is more important than ever for musicians and bands – so it is crucial they they should have the best possible venues to play in. The IMRO Live Music Venue Awards are a brilliant platform for recognising all of the good work that is happening all over Ireland in creating those opportunities for musicians.

Hot Press became involved to express our support for all of the guys behind the scenes who make such an important contribution through the public vote for the Hot Press Live Music Venue of the Year.

This year, we are giving special commendations to the Set Theatre in Kilkenny and the Cork Opera House – two venues that have added greatly to the options for fans to see their favourite artists – and for artists to play to their fans in top class facilities.

The overall winner of the Hot Press Live Music Venue of the Year is The O2. What is remarkable is the number of Irish bands that are now operating at the level where they can play this brilliant arena – not just the obvious international world beaters like Snow Patrol and The Script or legends like Christy Moore, but also Imelda May, The Coronas and Two Door Cinema Club. This is a fantastically rich time for Irish music. – which makes the investment that Live Nation have made in the O2 all the more  critical. It is one of the best venues in Europe in one of the great music cities – as it should be!”