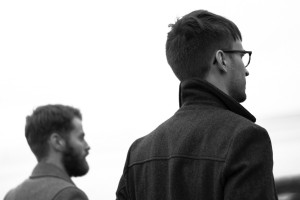 a new Belfast based record label brought to you by the team behind the successful Belfast based electronic label Champion Sound Recordings. The focus of the label is to explore the area just left of mainstream, where live musicianship, art and technology meet. Quiet Arch will pride themselves on releasing artist material on beautifully designed vinyl and digital platforms.

Ciaran and Ryan met at a music showcase event in Belfast’s Cathedral Quarter. Realising they were fans of each other’s work, they began writing an EP together that was recorded at Ryan Vail’s studio in Culmore, close to Donegal. The music is hugely inspired by the coastal setting, with sound recordings of the Atlantic waves, sea birds and the biting Irish wind.

The marriage of Ryan’s cinematic, electronic sound (Ryan recently scored BBC1 NI’s Hit the North documentary The Longest Night) and Ciaran’s wistful folk is a thing of beauty, bearing comparison to artists like King Creosote & Jon Hopkins, or Peter Broderick. It will be released early in 2015 on marbled, sea green vinyl, supported by a short tour taking in some unusual locations.

Ciaran Lavery is a homegrown success story, a Lurgan-based folk singer that has racked up an impressive eight million plays on Spotify with minimal promotion up to now. As a result, he is attracting great interest from the USA and Canada and has been invited to play at both the Folk Alliance in Kansas and Canadian Music Week on the strength of his fan base in those territories.

Tucan are one of very best live bands in Ireland right now, think Explosions in the Sky meet Horslips at a raucous Irish wedding and you get some of an idea of just how charged their performances are.

SlowPlaceLikeHome is the brainchild of Keith Mannion , whose debut album Romola has appeared in more than one Irish Album of the year lists.