Ocean FM today (Monday 16th December 2013) revealed their Play Irish Single, Album and Artist of the Year on foot of an extraordinary year for Irish music and its performers. 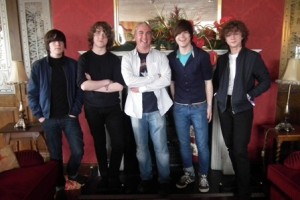 Announcing the awards on his Ocean Drive show, host Shane Smyth said ‘Irish music continues to grow and it’s been a difficult decision choosing an Irish Single, Album and Artist of the Year such is the wealth of amazing talent that exists on the island. We are thrilled to reveal that the song which we have awarded Single of the Year to is “Catch Me If You Can” by Dingle based Walking On Cars.  The distinctive voice of Patrick Sheehy along with the unique style on this track gave rise to fantasticly melodic pop song’.

‘We’d also like to congratulate Dublin based Kodaline as they have taken the title of Ocean FM’s Play Irish Album of the Year with “In A Perfect World”.  Each song on this album is a hit and with songs like “Brand New Day”, “High Hopes” and “Love Like This”, it was tough to keep this album out of the CD player’.

‘Finally our Ocean FM Play Irish Artists of the Year” are a bunch of lads who have had a crazy year.  They’ve performed all over the world and released their first album too.  Congratulations to Josh, Pete, Evan and Ross – The Strypes. The boys are firm favourites on Ocean Drive and no doubt will be even more successful in 2014.

Tim Collins, Chief Executive of Ocean FM said ‘the Play Irish initiative is a very important part of delivering on Ocean FM’s commitment to developing Irish talent. Over the past two years we have been the leading station in Ireland in our commitment to Irish music and this is a core part of our public service broadcasting ethos.  Shane’s knowledge and enthusiasm has been a key factor in the success of Play Irish on Ocean and we look forward to further developing the initiative in the coming years.’