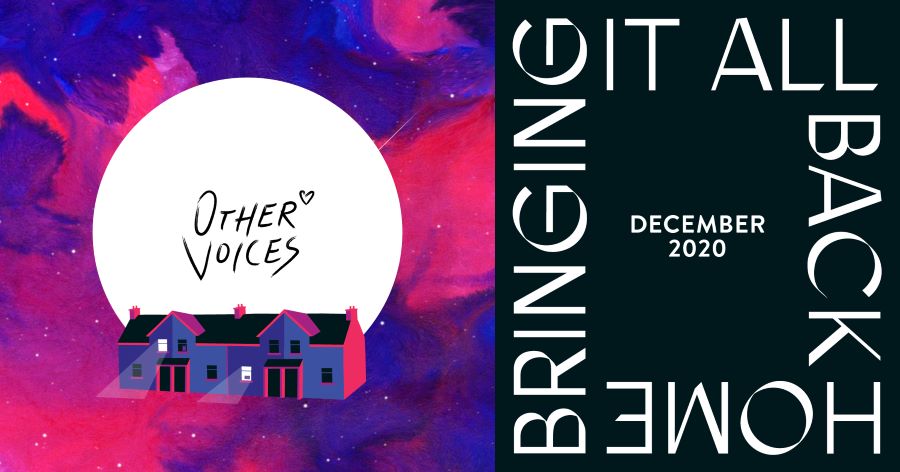 Other Voices are thrilled to unveil the full lineup and supporter registration for the virtual edition of their Dingle event.  They will be collapsing distance between the church of St James in Dingle and your homes with aweekend of beautifully realised live streams, bringing a piece of West Kerry directly to you.

While all the live streams will be publicly available for free, Other Voices have put together some limited supporter tickets for those who wish to support both them as an organisation and those they work with during this unprecedented crisis within the arts industry.

By buying one of their tiered digital supporter tickets, you’ll be supporting artists and crew, who are facing immeasurable difficulty, with plenty of perks and prizes thrown in for good measure, purchase here.

This live stream event is made possible with the support of the Department of Tourism, Culture, Arts, Gaeltacht, Sport and Media, Kerry County Council, Tourism Ireland, IMRO, RTÉ, Jones Engineering Group and eir.

Our Coasts Our Voices is a collaborative creative educational project which uses music, spoken word and interactive workshops to explore our waterways, coastline, ocean and marine life. Join us for a fun, interactive, and a very child-friendly (4+) live-stream from the Dingle Oceanworld Aquarium on December 5th, featuring Paul Noonan of BellX1 and Ray Foley of Clean Coasts.

The Minister for Tourism, Culture, Arts, Gaeltacht, Sport and Media, Catherine Martin, T.D., said: “Cultural events such as Other Voices Dingle continue to be a soothing balm in these challenging times and the importance of this aspect of culture can be seen in the continued and unprecedented government investment in the sector. I am happy to support this event which reminds us that when times are difficult, it is often our artists who offer us hope.“

Other Voices founder Philip King said: “We are absolutely delighted that Other Voices will be going ahead in Dingle again this year, streamed live , from the West of Ireland to the world. This year, the thousands of people who come to Dingle for Other Voices can’t come. The hundreds of thousands of people who normally come back home to Ireland for Christmas can’t come.  Thankfully, with the support of Minister Catherine Martin and her Department, our artists and crew are able to be in Dingle to produce an extended Other Voices festival – Bringing It All Back Home – that will be streamed live over five nights. We will collapse distance between the Church of St James here in Dingle, in the Gaeltacht of West Kerry and homes all around the island of Ireland and across the whole wide world. It will be an experience like no other, in a year like no other. You are invited to take the best seat in the house.”

Chief Executive at IMRO Victor Finn: said “It’s important this year in particular that we have continued to provide an International stage for emerging Irish artists. Other Voices provides a unique platform for our music to reach all corners of the globe through online and global television outlets”.

Executive Producer at RTÉ Justin Healy said: “This year more than ever supporting Irish artists couldn’t be more important to us, and in Other Voices we have a unique opportunity to bring their work and the magic of Dingle to a worldwide audience. We are delighted to continue to support Other Voices and look forward to bringing this years special series to our audience on multiple platforms.”

Other Voices is made possible with the support of the Department of Tourism, Culture, Arts, Gaeltacht, Sport and Media, Kerry County Council, Tourism Ireland, IMRO, RTÉ, Jones Engineering Group and eir

This year, Other Voices will be working with the St James Restoration Fund and the Irish Music Industry Covid-19 Relief Fund. More information on these partnerships coming soon