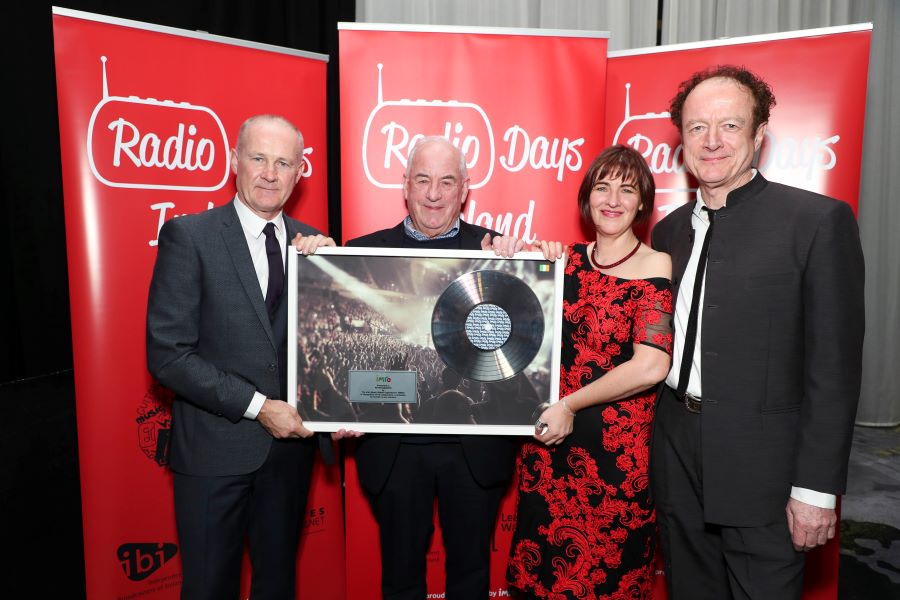 The 2020 edition of RadioDays Ireland, a unique two-day conference for those working within the Irish radio industry, took place in the Gibson Hotel on February 20th and 21st.

To coincide with the conference, which is sponsored by IMRO, leading Irish music publisher, Peter Bardon was presented with an award from IMRO to mark his Outstanding Contribution to the Irish Music Industry. Director of Bardis Music and ex-Chair of the Board of MCPSI, Peter Bardon began his career as bass player with Irish ‘60s legends The Greenbeats. After a stint in showband and cabaret management, he moved to music publishing. Bardis Music was established in 1973 and its first copyright ‘Cross Your Heart’, written by Paul Lyttle and sung by Irish star Tina, represented Ireland in the 1974 Eurovision Song Contest in Brighton, England, where it finished 5th behind Abba’s ‘Waterloo’. Since that time Bardis Music has published many of Ireland’s most well-known songs including classics such as Liam Reilly’s ‘Summer In Dublin and ‘Flight Of Earls’, Patsy Cavanagh’s ‘Home To Donegal’, and John Duggan’s ‘Roads Of Kildare’ and ‘Rose Of Castlerea’, all of which have been covered by more than 20 different artists.

Bardon handles publishing for Niall Toner and Ronan Hardiman (composer of the Lord of the Dance and Feet of Flame music) among others. A former shareholder in Lite FM (now Q102), in 2008 he placed Niall Toner’s ‘The Reak Reek’, aka ‘The Dublin 2-Step’, in the video game Grand Theft Auto 4, with sales in excess of $7 million, Bardis published the music from Albert Nobbs, including ‘Lay Your Head Down’, composed by Brian Byrne and Glenn Close, and performed by Sinéad O’Connor (nominated for Best Original Song at the Golden Globes 2012). The Bardis roster now includes country star Nathan Carter, Shane Sullivan and actor turned musician, Patrick Bergin.

Hot Press’s Niall Stokes delivered an enlightening speech on the history of the broadcasting sector in Ireland, delving into 30 years of independent broadcasting right up to the present day and the current challenges and opportunities facing the sector.

Red FM were also acknowledged at the event by IMRO, receiving an award to mark their ongoing support to music creators.