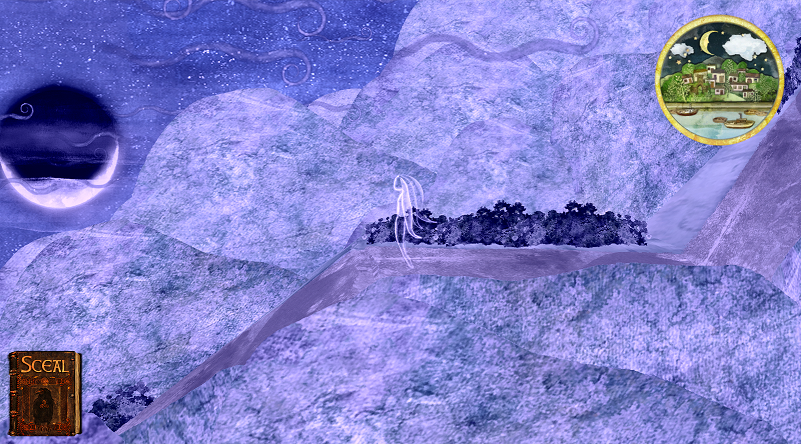 Supernatural Irish mystery game Scéal (meaning ‘Story’) by Independent game developer Joint Custody is now available on Steam. Rooted in Irish folklore, the game tells the emotional tale of a young girl’s spirit that’s trapped on earth. She must unravel the truth about her past to secure her passage to the afterlife. The world of Sceal is like a ‘living storybook’, with rich watercolor-style graphics that pop-up and animate as you travel through it.

Drawing heavily on Irish mythology and Celtic symbolism, players inhabit the spirit of a young girl who unlocks fragments of her memory by completing tasks for the townspeople of Irish fishing village Carlingford. On her travels, the girl encounters a mysterious Raven named Branna, who promises to take her to the afterlife once all her memories are restored. Branna warns the spirit girl that the outcome of her story will change depending on her actions, with the game containing three unique endings.

Throughout Sceal the spirit girl must use her supernatural powers to complete tasks and quests. These include the ability to possess the bodies of villagers as well as transform into an Angel of Light or a Dark Banshee. Turning into these two supernatural beings enables the spirit girl to use their powers to paint the story in summer or winter colours and unlock more clues to progress the story.

To craft an authentic soundtrack for the game, developer Joint Custody worked with renowned Irish folk singers Lorcan Mac Mathuna and Aislinn Duffy, who wrote and composed the music for the game. Each track was written and recorded in three different styles to reflect the various emotional states of the main character. The full soundtrack is available on Soundcloud at: http://bit.ly/2dY2kt