Meteor and The Choice Music Prize are urging you, the Iri 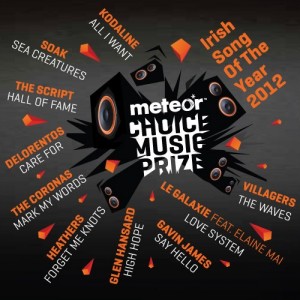 sh public, to have your say and vote for the Meteor Choice Music Prize Irish Song of the Year 2012.

Now in its second year, the Meteor Choice Music Prize- Irish Song of the Year 2012 celebrates some of Ireland’s favourite homegrown songs of the previous year and encourages people to show their support and get behind great Irish music.

You can get involved by casting your vote through Meteor’s Facebook page www.facebook.com/meteor or by texting ‘SONG’ to 085 7114444 for list of nominees.

The shortlist features a formidable list of 10 anthems which have rocked the Irish airwaves in 2012. The nominations are decided by the Meteor Choice Music Prize judging panel and the Irish airplay charts for 2012. The 2012 shortlist is as follows:

Kodaline – All I Want (Sony)

The Script – Hall of Fame (Sony)

Voting & Win Tickets to the Event

It is the public who will decide the winner by voting online at www.facebookcom/meteor or by texting ‘SONG’ to 0857114444 for a list of nominees. All voters are in with a chance to win one of 20 pairs of tickets to the Meteor Choice Music Prize live event on March 7th in Vicar Street and can vote once a day until voting closes on March 3rd.

The winning entry will be announced at the live event and awarded the Meteor Choice Music Prize Irish Song of the Year Trophy along with a prize fund of €3,000.

The shortlisted songs will be profiled on air by Tony Fenton on Today FM from Monday 4th – Friday 8th February with two songs from the list played each day. Tony will also present the award at the live event on 7th March.

The Meteor Choice Music Prize will be broadcast live on the night on Today FM in a special four-hour extended programme during the Paul McLoone Show. It will also be live streamed on www.meteor.ie and www.facebook.com/meteor. Tickets for the Meteor Choice Music Prize live event are on sale from all Ticketmaster outlets and from http://www.ticketmaster.ie, priced €22.50 including booking fee.