“Son of Lucifer Wins” on Moonlit Night as Daddy Joey Lee Lawlor Welcomes his 7th Child and a Star is Born! 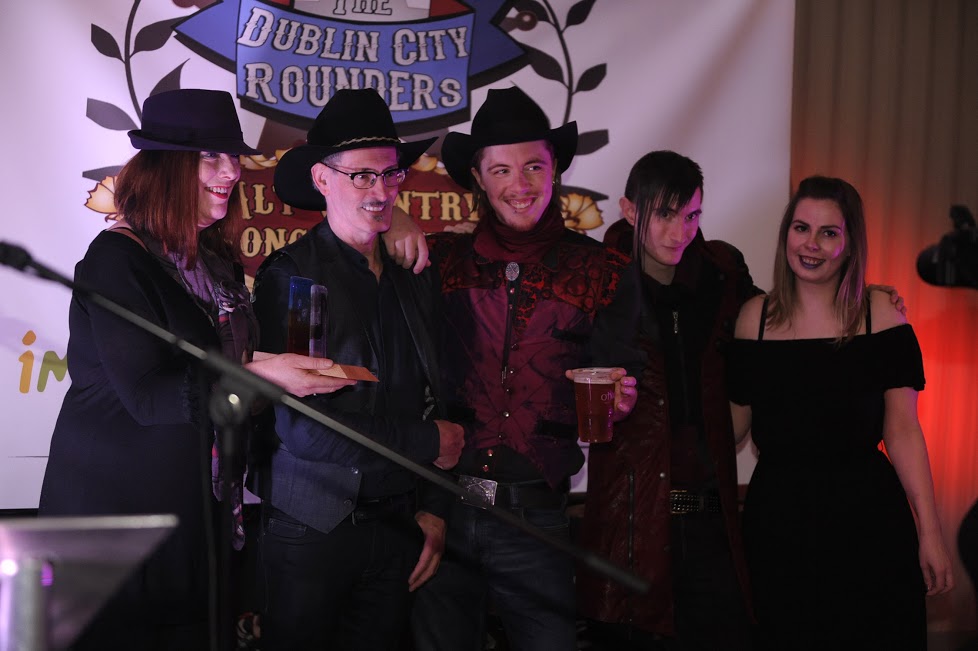 October 13th, 2016 will long be remembered as a landmark night for Ireland’s Alternative Country Music. The Gala event was attended by music legends and newcomers alike, the occasion was the first annual Dublin City Rounders Alt-Country Song Contest Winners Ceremony held at IMRO HQ. The event was hosted by the fabulous Dublin City Rounders, brothers Rohan and Al Healy, of The Voice UK (BBC) and Busker Abu (TG4) fame.

The Dublin City Rounders performed a rousing rendition of their song “The Rockin’ Commandos” followed by a brand new tune; the title track from their forthcoming album “It Used to be About the Money”.

The esteemed judges of the contest were Niall Toner, RTE DJ with the Roots Freeway, celebrated Irish bluegrass & alt-country songwriter and musician whose songs have appeared in the likes of Nashville (TV) and Grand Theft Auto 5 (game). Catherine Simpson Schefter, DJ at Garden County Radio’s Twang Time, and member of rock n roll, old timey and bluegrass groups Thunderbirds & Huegrass. And David Virgin, 5 number 1 singles in the Australian independent charts, and has shared the stage with the likes of Nick Cave, INXS, Mary Black & Cat Power.

The prizes included custom western head ware presented by John Shevlin of Shevlin Millinery to 3rd place winner Elga Fox (Republic of Telly, Love/Hate) for her song “Gathering Moss”. The second place prize of €100 cash, a professional live music video and slot at the Short Grass Sessions was presented by Mike Gleeson of DownDa Road Productions and awarded to Vagabonds and Thieves for their song “Devil’s Beat”. And first place was awarded to Joey Lee Lawlor for his song “Son Of Lucifer”. The award of €300 and a beautiful hand crafted sculpture by artists Deidre Griffin and George Moor was accepted by Joey’s sister as Joey awaited the birth of his 7th child in one of Dublin’s maternity hospitals.

Good luck and fairplay to all the talented entrants who included songwriters from all over the island of Ireland, and cheers and welcome to the birth of a new and exciting addition to the great wealth that is the Irish Music world.