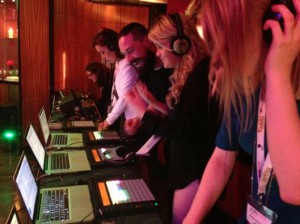 When Certified Ableton Live Trainer Martin Clancy was asked to create something special for the iDig Music Festival in April, he decided to put a spin on his popular ‘Ableton Push Playground’. The ‘Ableton Push Gaming Composition Workshop’ is gearing up to be one of the highlights of the Festival.

The Martin Clancy “Ableton Push Gaming Composition Workshop” is a drop-in music lab where you can try Push and Ableton Live for yourself and get expert advice and guidance from artists and trainers while composing your own unique gaming soundtrack. Martin and the trainers have some real treats in store for festival attendees. No musical experience is needed as Martin says ‘All you need is imagination.’ Clancy is keeping his cards close to his  chest on this one, and hasn’t yet revealed what iconic gaming footage and soundtrack he will be using.

The iDigMusic Festival is the first Gaming Community music event held in Ireland and has partners such as Google, Microsoft and ConCast. Martin will be in the illustrious company of a  number of Grammy and BAFTA Nominated composers such as Christopher Tin (Civilization) , Russell Bower (World of Warcraft Composer and Head of Music – Blizzard) and Ireland’s own Eimear Noone (Zelda) along with the composers of the Angry Birds Soundtrack and Jill Aversa (HALO, God of War). The festival takes place in the Convention Centre, Dublin from 4th to 6th April. Full details, including ticket info, here: http://idigmusicfest.com/

IMRO members can avail of a discounted admission price for the festival. Contact ei.ormi@pihsrebmem for full details.