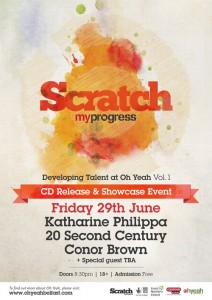 The first graduates have emerged from a special programme, ‘Scratch My Progress’, at the Oh Yeah music centre in Belfast.  These are: Katharine Phillipa, Conor Mason, 20 Second Century and Everyday Superheroes. At the end of this six month course they have each recorded a track for a compilation CD and will celebrate their completion of the pilot scheme with a gig.

This live event takes place at Oh Yeah, 15-21 Gordon Street, Belfast on Friday June 28. The compilation CD will be available on the night and a special guest will also feature.

Scratch My Progress is the first version of a talent development project, supported by the Arts Council of Northern Ireland, Invest Northern Ireland and promoted by the Citybeat radio station. One acts was chosen from a public vote and the others were selected by an industry panel.

The musicians were then introduced to vocal coaching, PR, photo sessions and meetings with a series of industry professionals. These included a specialist lawyer, a music industry accountant, an executive at Domino Records and a former A&R chief at Virgin Records. They learnt about copyright, film synch and survival skills on tour.

All of the acts have now been profiled by BBC Radio 1 Introducing. Meanwhile Katharine Phillipa appeared with the Ulster Orchestra in a live BBC broadcast from the Ulster Hall on May 22.

” I think I need a surrogate musical family.  In Northern Ireland, I’ve seen it for sure – in other musicians, BBC Radio Ulster folk, and of course, at the Oh Yeah Centre, which is such a necessary base and nucleus within the music scene. With this kind of nurturing at the onset, a more stable musical growth can occur, just as the opportunity for music to be heard by as many ears as possible deepens.”

The second series of Scratch My Progress will be launched in the second half of 2012.