Microsoft and MUZU TV, in association with IMRO have announced a new music initiative called Unsigned and Online – a nationwide competition designed to promote independent Irish music online. The programme challenges unsigned bands to creatively use a suite of Microsoft products, social networking and a smart online presence to promote their band, to rise up through the MUZU TV leader board and compete for a top prize. 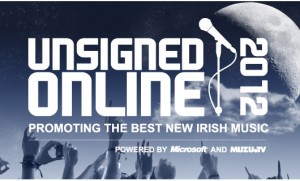 The band that secures the biggest online fan base at the end of the eight week initiative will be crowned the winner of the inaugural Unsigned and Online competition. This band will win a prize that is designed to help them to bring their music to the masses. Valued at over €10,000 the prize consists of a digital marketing campaign for the band across the major Microsoft platforms; including Windows Live and Ireland’s #1 portal, MSN. They will also win an acoustic session in the MUZU TV studio, and a slot in the line-up at Dublin’s Academy Venue – giving a real profile boost to the winning unsigned band.

Bands can enter the competition via the Competition App on www.facebook.com/unsignedandonline and use their newly created band channel on Muzu.tv to generate views towards winning the competition.