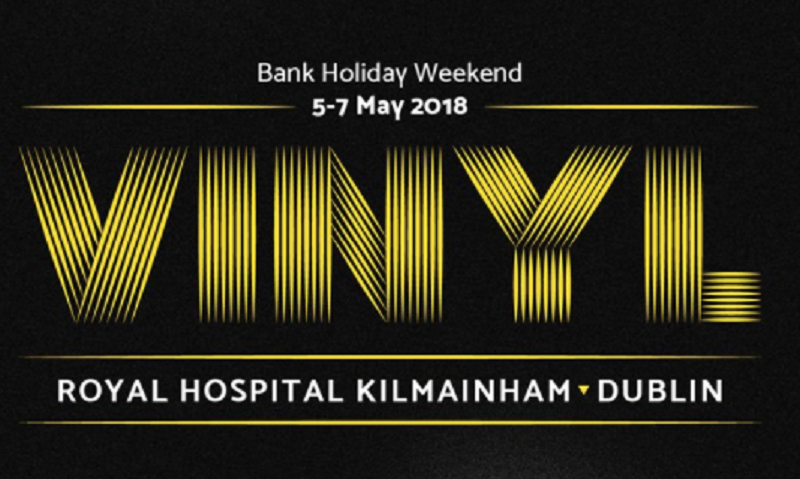 VINYL is an immersive theatre of the mind that insightfully celebrates the rich history and enduring legacy of vinyl, its landmark recordings, key personnel, and the groundbreaking labels and studios that cultivated such talent. VINYL will feature specially programmed talks, panel discussions, curated collections, music performances, album playbacks, pop-up stores, signings, and equipment showcases. The various events will each make special use of the RHK’s expansive grounds and infrastructure.

The first festival of its kind anywhere in the world, VINYL will present the people who made the records that would define not just a number of eras but also their respective cultures. It runs from Saturday, 5 May to Monday, 7 May, and will take place in the Royal Hospital Kilmainham, Dublin.

Christy Dignam, Joe Jewell and Billy McGuinness of Aslan will reflect on their debut album, Feel No Shame, released some thirty years ago, in the company of Something Happens frontman, Tom Dunne

The Cranberries’ Everybody Else Is Doing It, So Why Can’t We?

Noel Hogan (co-songwriter with Dolores O’Riordan of The Cranberries) will reunite with producer Stephen Street to reminisce about the making of the band’s debut Everybody Else Is Doing It, So Why Can’t We? in an event hosted by Hot Press‘s Stuart Clark

Shane MacGowan, in conversation with Stiff Records supremo Dave Robinson, will consider his favourite records and how they have shaped him as one of the great chroniclers of our age

The fascinating (and unexplored) history of Irish vinyl will be methodically outlined by Philip King (the man behind the much-lauded Other Voices) and Anthony Wall, BAFTA/Emmy-winning filmmaker and Series Editor of BBC’s Arena

Co-founding member of The Cure, Lol Tolhurst, will outline his relationship with Robert Smith (as detailed in his 2016 memoir, Cured: The Tale of Two Imaginary Boys), as well as discuss The Cure, in this their fortieth year

Designer and musician Stephen Averill will present ‘Death Valley ’86’, a series of images he took whilst working with Anton Corbijn on location for the photoshoot of U2’s The Joshua Tree

Photographer Peter Boettcher will discuss his celebrated images of Kraftwerk with Sinéad Gleeson, editor of The Long Gaze Back (an anthology of Irish women writers), this year’s ‘One City One Book’

Berlin-based Victor Van Vugt (The Fall, PJ Harvey, Nick Cave) will chart his production practices as well as chat about the artists he has worked with in conversation with Hot Press’s Roisin Dwyer

Pioneer, maverick and legend, Dave Robinson will recount his days as supremo of Stiff Records, home to such luminaries as Madness, The Pogues, Elvis Costello, Ian Drury and The Damned

Tracey Thorn will discuss her music and writing career in the wake of her latest critically acclaimed album, Record, in conversation with Sinéad Gleeson

Ed Piller And Martin Freeman In Conversation With Mick Heaney

Ed Piller (of Acid Jazz Records) and the actor Martin Freeman (The Hobbit, Black Panther, Sherlock) will discuss their mutual love of mod subculture, its range of influences, its music, and how it informs their lives, not to mention their recent collaboration, Jazz On The Corner, in an event hosted by Mick Heaney

Tim Burgess of The Charlatans will wax lyrical about the nature of vinyl and music with his good friend and all-round comedic Renaissance woman, Sharon Horgan (Pulling, Catastrophe)

Chrissie Hynde will chat with journalist and broadcaster Pete Paphides about The Pretenders some forty years on, as well as her celebrated memoir Reckless: My Life as a Pretender

The Undertones In Conversation

Damian O’Neill and Michael Bradley of The Undertones will be reflecting on over forty years of the band and their classic pop/punk songs, including the eternally brilliant Teenage Kicks

The Stunning In Conversation With Tom Dunne

The Stunning’s Steve and Joe Wall will describe to Tom Dunne how to sustain a music career, as well as talk about the twenty-fifth anniversary of their album, Once Around The World, and their recent reimagining of same, the No 1 Twice Around The World

Irmin Schmidt, one of the great pioneers of ambient and experimental music, will discuss the history and legacy of Can with the writer Rob Young (Electric Eden: Unearthing Britain’s Visionary Music)

Staunchly feminist spirit and true survivor Peggy Seeger will draw from her 2017 memoir First Time Ever to speak of a childhood immersed in music and politics and featuring some of the most influential names in popular culture, from Woody Guthrie and Jackson Pollock, to Pete Seeger and Ewan MacColl

Bob Geldof, in conversation with Pete Paphides, will discuss the early days of the Boomtown Rats, punk/pop success, international fame, and why he will always be a musician

Donovan In Conversation With John Kelly

Renowned songwriter and musician Donovan will chat about a life in music, including his relationship with The Beatles and the timeless appeal of songs such as Mellow Yellow and Hurdy Gurdy Man, in conversation with John Kelly

Record producer Flood (U2, Depeche Mode, Nick Cave) will be in conversation with celebrated actor Cillian Murphy to discuss three landmark recordings he has been involved in: Depeche Mode’s ‘Personal Jesus’, U2’s ‘Zooropa’ and Smashing Pumpkins’s ‘1979′

Gruff Rhys of Super Furry Animals will chat to fellow countryman Huw Stephens about his search for cultural roots and his forthcoming release, Babelsberg

Brix Smith will be talking with Manchester DJ, writer and broadcaster Dave Haslam about her former husband, Mark E Smith, and her days in iconic punk band, The Fall

Singer-songwriter and political activist, Billy Bragg, will outline his primary influences in both fields in a career that has spanned over four decades

A pioneer of intelligent design, Malcolm Garrett will be in conversation with Dave Haslam to discuss his work for Buzzcocks and Magazine in the late Seventies, as well as more recent sleeves for Duran Duran, Simple Minds and Peter Gabriel

Simon Raymonde, bass guitarist and keyboard player with the sadly defunct Cocteau Twins, will discuss with Huw Stephens (broadcaster and co-host of Other Voices) the history and development of his Bella Union record label, as well as the musicians associated with it

Described by the World Photography Organisation as ‘one of Britain’s most influential photographers’, Brian Griffin will chat about his work on such albums as Echo And The Funnymen’s Heaven Up Here, Depeche Mode’s A Broken Frame and Iggy Pop’s Soldier