Winner of the IMRO Christie Hennessy Song Competition 2012 Is Announced

Christine Deady and Enda Reilly were announced as winners of the IMRO Christie Hennessy Song Competition 2012 at the live final in The Brandon Hotel, Tralee, on Saturday night for their song “Follow The Water”. 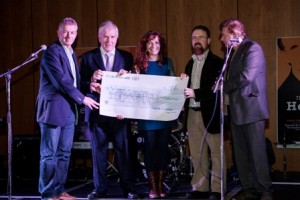 Christine Deady is a songwriter from Skibbereen, West Cork. She comes from a large musical family and has spent some time earning her badges gigging the Irish music scene. Already in her short career she has been shortlisted Most Promising New Act 2010 at the Meteor Awards, shortlisted by Vodafone as a “Bright New Sound”, and shortlisted in the Best Irish Female category for the Balcony TV Awards, that’s a lot of shortlisting! Christine has spent the last number of years working on honing her craft as a songwriter and is currently in the midst of recording her debut album.

Dublin singer-songwriter Enda Reilly writes in both English and Irish and his Irish songs can be heard regularly on RTÉ Raidio na Gaeltachta and RTÉ 1. To date in 2012, Enda has also had appearances on TG4 and BBC2 NI. He has represented Ireland in Inverness at Nós Úr a minority language song competition and his song Dónal Ná Fág sung by Aoife Scott represented Ireland in Liet 2012 in Italy.  2012 has seen Enda perform in Paris and at the London Irish Olympic House with the poet Stephen James Smith with their Arise and Go! spoken word and song collaboration project. He also reaches out to younger generations through his Climate Change Songs Workshops initiative, bringing fun songs and environmental issues into schools and other groups, through Irish and English. He also plays regularly with the fun-loving collective, The Lazy Band in Dublin. His next project after Arise and Go will be in the Irish language, which he’s currently recording and mixing.

Christine and Enda met on a weekend of songwriting in Carlingford where a number of writers got together, rented a house and shared songwriting ideas, tips and woes and so ‘Follow the water’ was born.

Jimmy Deenihan TD, Minister for Arts, Sport and Tourism presented Christine and Enda with a cheque for €1,000 on the night, which came courtesy of Tralee Chamber Alliance.