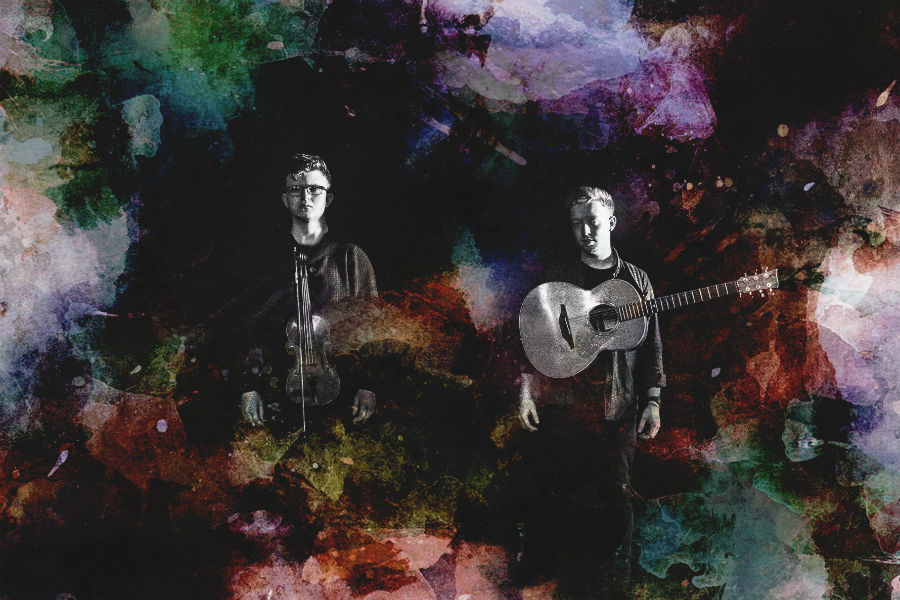 Benedict Morris (20) from Glasgow and Cormac Crummey (21) from Belfast are a fresh fiddle and guitar duo that first ignited 4 years ago at Fleadh Cheoil na hEireann in Sligo and haven’t looked back since. They have subsequently compiled a vast store of tunes, mostly new compositions penned by themselves and some of Scotland and Ireland’s most notable musicians such as Mike Vass, John Brady, Aidan O’Rourke (Lau), Hamish Napier and Ted Kelly (Moxie). Their poise and musicianship has flourished over their time together; producing an energetic and vibrant collection of new music that has evolved in the working class cities of Glasgow and Belfast with shipyards, linen mills and bonded whiskey warehouses as their backdrop.

Considered to be two of the most exciting young musicians on the traditional music scene they have recently recorded their debut album ‘Wavelength’ in RedBox Recording Studios, Belfast with engineer and renowned musician Dónal O’Connor. Casting aside all technical considerations these two fearless pioneers are imagining a new skin on the tradition. This music sparkles, glistens and energises all who come into contact with it. Touring with a full band featuring the cream of Ireland’s vibrant music scene; Cathal Murphy (Cúig) on Drums, Jos Kelly (Moxie) on Keys and Richie Delahunty (Echo) on Electric Guitar, they are sweeping a whole new generation of listeners and musicians alike into the 21st-century.

The energy of their performances is contained through tight, intricate arrangements, then released in a flurry of potency with dashes of different influences such as jazz-funk and even rock; there is a little bit for everyone in their music. They’ve just blown audiences away on their recent sold out tour of Ireland and Scotland taking in iconic venues such as The Duncairn in Belfast and Whelan’s in Dublin.

Cormac Crummey has toured Europe with several artists such as Lisa Canny and Cúig. He graduated from Queen’s University Belfast with a BSc in Sonic Arts and Music Technology and has recently commenced recording with a new trio featuring Alan Doherty and Tola Custy. Benedict Morris has played at some of the biggest festivals in Europe such as Tønder Festival with Ímar and HebCelt with The Hur, a folk pop band he currently plays in. He is also the featured fiddle player with 5 times World Champion Irish dancer David Geaney in his new dance show Velocity: Rising. Bene has just been confirmed as a finalist in BBC Radio Scotland’s Young Traditional Musician of the Year 2019.

“It’s not every day you listen to a duo and know that they’re going to be the next best thing. Bene & Cormac. Incredible” – Mohsen Amini 2018 Musician of the Year – BBC Radio 2 Folk Awards