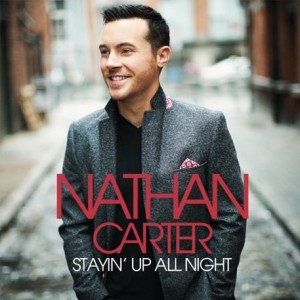 His fourth studio album “Stayin’ Up All Night” has shot straight to the top of the official Irish sales chart today, outselling its nearest competition by almost two to one. Not only has “Stayin’ Up All Night” stormed the Irish charts, Nathan’s last #1 album “Beautiful Life” made a re-entry to the Top 5 this week also.

On receiving the news, an overjoyed Nathan exclaimed, “I’m absolutely delighted and very proud that my album has gone straight to Number 1. I have co-written most of the songs on this album and I think it’s my best one so far which makes it’s extra special that it’s gone straight to the top of the charts. A massive ‘Thank You’ to all my fans for making this possible.”

The 25 year-old household name has had three #1 albums, two #1 singles and two #1 live DVDs featured on the Irish Charts. His last album ‘Beautiful Life’ has been certified 4-times platinum and he even had his own Christmas TV special on RTE last year.

Acknowledged as the catalyst to the rebirth of popularity of Country Music in Ireland and the dance craze that has swept the country, Nathan Carter is the most successful live act across venues in Ireland at this moment in time.

Like Bob Dylan’s ‘Never Ending Tour’, Nathan has been jumping out on stage every week for over 3 years from the head to the heal of this island. When his single release of the Bob Dylan song “Wagon Wheel” hit the number one spot on our charts, the secret was out and Nathan`s music rapidly evolved from the dance halls to the city halls, with sold out live tours to boot.

Inspired by the music his parents’ loved, music has always been at the heart of Nathan’s life. Traditional roots were in the blood, but he also grew up in a house where Country music filled the air, with his parents and his Nan filling his young head with the great songs of Johnny Cash , Waylon Jennings , Don Williams and Dolly Parton .

As a reflection, Nathan has curated his very own playlist, ‘Nathan Carter Recommends’, featuring some of his favourite Nashville inspired songs, some classic country gems and plenty of his own workings to cater to his fans. It’s available to listen here:

Stayin’ Up All Night features 13 tracks – most co-written by Nathan – of his trademark modern country sound, and was preceded by the single ‘Temple Bar’, a paen to the streets of Dublin’s famous district. Balanced with mid-tempo numbers like Island Town, Buy Me A Rose and Liverpool, there’s a gentle side to the album, with a touch of nostalgia to ease you though the morning after. Don’t Know Lonely is a huge ballad, while Banks of the Roses is a traditional stomper, revealing Nathan’s fiddles-and-accordion Irish folk roots. The album rounds off with the beautifully personal Thank You.

While he might not have stopped to catch a breath throughout 2015, there’s no sign of Nathan slowing down any time soon. He is currently on the road on the “Stayin Up All Night Tour”.
A full list of live dates are available at www.nathancartermusic.com/dates.