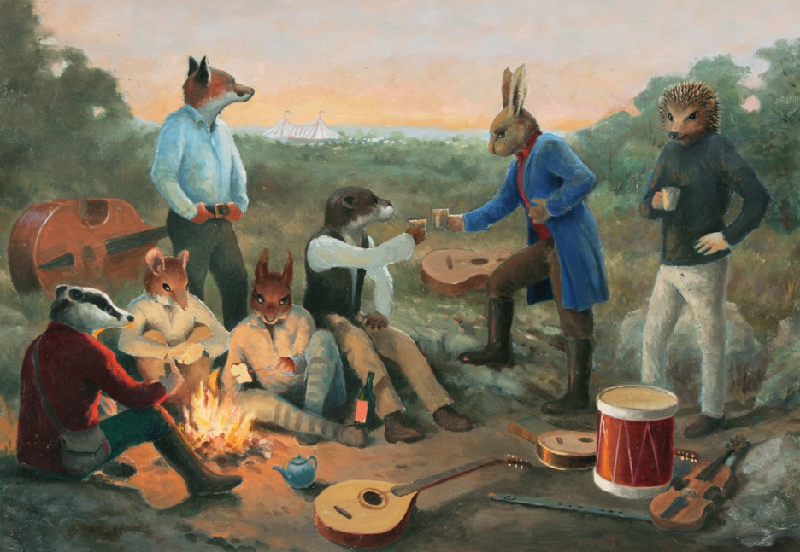 Sons of Burlap are set to release a brand new double A side with singles Blood Margaret and Caravan ahead of their debut album, “Dance of Pholcus” which is due for release on Friday, 13th September.

Perhaps Sons of Burlap could seem, at first glance, a rather unlikely troop. Their music is, not unlike the musicians themselves, a mixture of pretty old and relatively new. They combine traditional instruments, fiddle, flute, mandolins, with overdriven electric guitar – while the crashing drums and thumping bass are the sheepdogs that keep the flock together. Noisy folk music with influences from eastern Europe and beyond sort of describe what you are about to hear but cannot prepare you for the blast of energy that is difficult not to dance to.

In a sense the band was formed in 1970s Bangor Co Down. Julian, Philip, Nano and the sorely missed Bart Lyons would get together for impromptu sessions and jams for years. In pubs, living rooms and barn dances across Ireland the group gradually stumbled upon some of that eastern influence that forms the song writing bedrock of “Dance of Pholcus”.

In 2012 a punk rock spirit was added to that bedrock with Julian’s sons Ewen (CATALAN!/Axis of) and Rory (ASIWYFA) joining the party, along with ASIWYFA’s pounding rhythm section of Chris Wee and Johnny Adger. With the sad passing of Bart Lyons soon after the band established themselves in full, they started to write, record and perform with an added sense of zeal and ambition, now performing in his honour and under a name inspired by Bart (Dr Burlap himself!) This is Sons of Burlap.