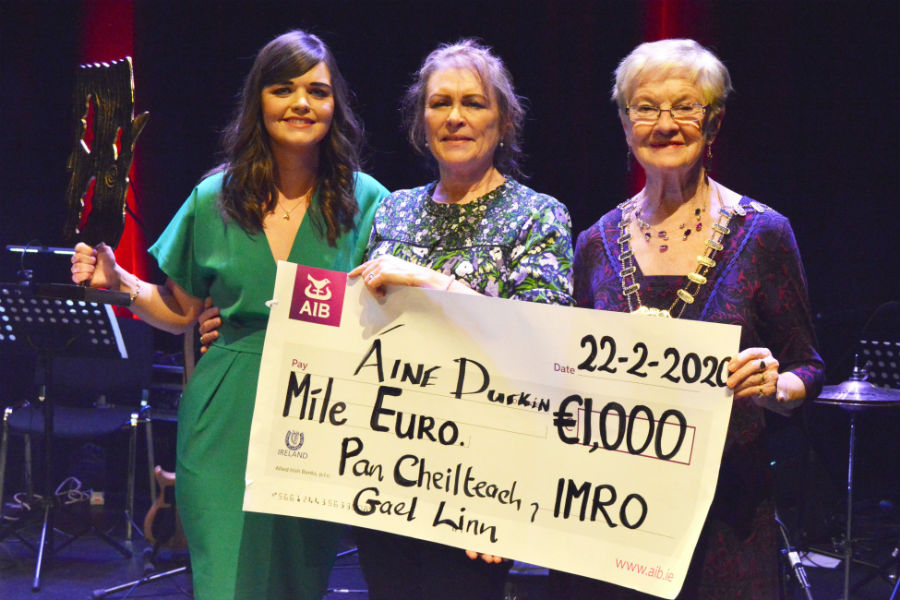 20 songs were shortlisted to perform at the national final out of  a total entry of almost 50 entries this year.

This young Kilkenny based group have been performing together and forming their own unique sound for just over a year. They write much of their own music and had the opportunity to perform their track ‘Dubh Agus Ómra’ (Black And Amber) on ‘RTE’s Up for the Match’ ahead of the All Ireland Hurling Final last year. They recently played to a sold out Set Theatre in Kilkenny and are working hard to create a mini Gaeltacht among the youth of Kilkenny.

Ciara is a fifteen year old singer/songwriter from Carlow and is a third year student in Gaelcholáiste Cheatharlach. She began to play guitar before the age of twelve with teacher Mike Hennessey and in a matter of weeks became a very accomplished player. She began writing and performing her own songs soon after and in 2018 was listed as a finalist in the 23rd Annual USA Song writing Competition. She also wrote a song with country singer Luan Parle which she later recorded in the KCLR 96fm studios.

In 2019 Ciara came in second place at the Scléip Gael Linn all Ireland Finals. This is her first entry to the Pan Celtic National Song Contest.

Áine is a veteran of the Pan Celtic Song Contest having won the contest  here in Carlow in 2013 with ‘Le Do Thaobh’ as well as winning both the National and the International competition last year with her song ‘Ní Thuigim’. The Connemara native has been living in Buncranagh, Co. Donegal since 1980 where she writes songs, poetry and her blog ‘Mise Áine’. Sponsored by IMRO, the winning composer was presented with a cheque for €1,000 and the national trophy as well as having the honour of representing Ireland in the Pan Celtic International Song Contest which will be held in Carlow on Thursday, 16th April.

Gráinne Ni Fháthartha who performed the winning song is a well known Sean-Nós singer from Galway who has previously won competitions at Oirechtas na Samhna and Fleadh Ceol na hÉireann.

She is a primary school teacher in Athenry and also teaches Sean-Nós Singing in Connemara.

The Irish entry has been chosen  and the stage is now set for a fantastic Pan Celtic International Festival in Carlow at Easter time running from 14th – 19th April.  Don’t miss it!