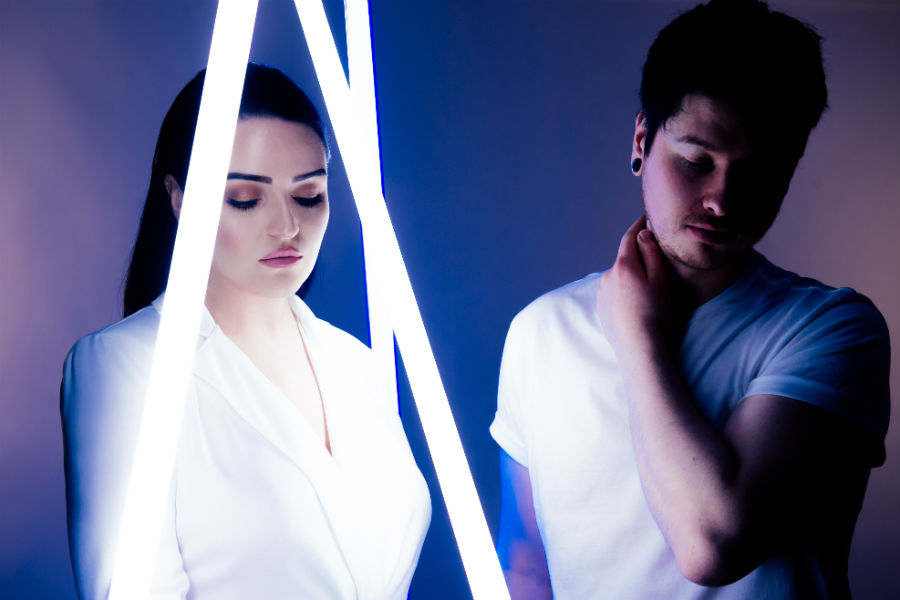 History dictates that pop music is always evolving. Specific genres often have their moment in the sun and trends come to prominence before they drift away again, but the essence of a killer song never really changes. The hallmarks never go out of style – expertly crafted songwriting with hooks that burrow deep into the memory, delivered by vocalists with power, poise and an innate ability to convey a spectrum of emotions.

These are attributes that Dublin duo Alex & Echoes have in abundance, as demonstrated by their independently released debut track ‘Whiskey’. Recently signed to CSR Recordings the electro-pop pair already possess a body of work that signposts bigger things as 2018 unfolds.

That voice belongs to Jessica Smith, a young talent who comes from a lineage of accomplished vocalists – her father, for example, is a trained baritone. Meanwhile, producer and instrumentalist Cormac Butler’s roots in music go back to childhood when he was taught the violin. Although ultimately far more enamoured by piano and guitar, it gave him the grounding to turn his hand to whatever intrigues him. As Jessica jokes, “Cormac will say he can’t play an instrument and the next thing I know he’s like a wizard at it.”

Both Jessica and Cormac started out playing separately in live bands, but grew disheartened with the band format. “I got into music production when I decided to go it alone,” recalls Cormac. “I couldn’t rely on other people and there were too many opinions.” Jessica shared a similar experience. “It sounds a bit selfish,” she adds almost apologetically, “but I wanted to have more control over it.”

One of Jessica’s earliest breaks came when she was invited by a large American indie label to experiment with some sessions in New York. Before Ireland’s current renaissance for electro, urban and pop, she felt like she’d never find a producer at home with the international scaled talent to match her ambitions. “But when Cormac sent me some tracks, it was better than what I was working on in the States.”

They first met in Malahide on the outskirts of Dublin and forged an immediate creative connection. “I just couldn’t believe her voice, she sounded like a pop star,” says Cormac, still audibly impressed by his collaborator’s ability. “And we hit it off straight away which was very important. You can meet people who are great musicians, but you have to be able to spend twelve hours a day with them in the studio.”

At first their roles were black-and-white: Cormac would focus on the tracks and Jessica would work on the topline and lyrics. But like all great creative partnerships those boundaries blurred over time. They discovered that they could not only challenge each other to raise their game, but their traits allowed the other to shine. A few years on, their work together is cohesive and complementary rather than compartmentalised.

‘Come Alive’ is perhaps the best example of the direction that Alex & Echoes are heading in. Recalling the infectiousness of Sigala’s ‘Sweet Lovin’’ and the towering throwback pop of prime Whitney Houston, it jumps with an exuberance that makes it equally as home in clubs or daytime radio. Just as importantly, the production displays a real command of dynamics: modernist, cutting edge sounds burst to the forefront, but the nineties-tinged house keys are given the space to shine.

Songs such as ‘Drown In Gold’ are informed by a collage of sources, from experiences relatable to young people the world over to personal memories and observations from their circle of friends. “The best songs come when we sit down and just talk about what’s been going on,” summarises Cormac. “If we haven’t already got a track prepared, we start to play played on whatever emotion is already there,” adds Jessica, “and we often find that the vibe comes from the conversation we had beforehand.”

While Alex & Echoes can deliver anything from straight-to-the-point bangers to moody slow-burners, they’re eager not to define themselves by a single sonic approach. Chvrches and Disclosure are artists the duo admire, but their sound can go anywhere from its core electro-pop component. “Pop is so broad these days that you don’t need to limit yourself,” is the closest Cormac comes to defining their approach.

Another new track ‘Wish You Were Here’ flavours their cocktail of bass and beats with some power ballad bombast. It’s a song that would clearly shine when stripped right back to just vocals and piano, which reveals that Alex & Echoes have a timeless heart at the centre of their contemporary productions.

Although they use an array of loops, pads and trigger to bring their layered sound to the live arena, Alex & Echoes are committed to ensuring that their performances are energised with live elements – Cormac even brings some six-stringed guitar virtuosity to proceedings. So far, they’ve only played a trio of shows alongside other key artists from Ireland’s burgeoning electronic scene: Soulé, Hare Squead, and the Indiependence Music and Arts Festival in Cork. But there are also tentative plans to collaborate with singer-songwriter and labelmate DAY_S.

As for what comes next? Alex & Echoes share a range of burning ambitions but mostly they’re focused on the short term. “Over the next year I’d like our name to be on the map,” assesses Jessica, “so people know our songs, see us at festivals and we get our name out there so there’s a bit of a buzz about us.”

The ability is there for all to see and the parts are falling into place. It’s seems to be only a matter of time before Alex & Echoes are a hot tip for the top, both in Ireland and beyond.