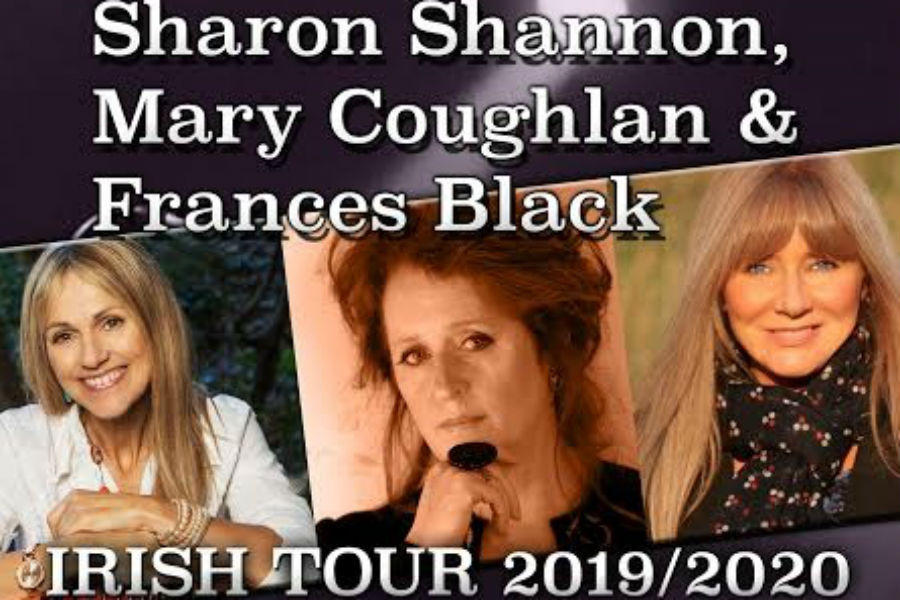 Sharon Shannon, Frances Black and Mary Coughlan are set to unite once again for a unique show bringing together their collective talents.

2020 Tour dates for An Evening With Sharon Shannon, Frances Black and Mary Coughlan have been announced with tickets on sale now from Ticketmaster and local venue box offices.

Sharon Shannon, Frances Black and Mary Coughlan will each perform a set with their own musicians featuring many of their greatest hits. All three ladies will then join together on stage to finish the night with a truly magical finale.

The three performers are some of the most successful female artists Ireland has to offer and are no stranger to performing together having been an integral part of the successful Woman’s Heart albums and tours.

Sharon Shannon has been a musical icon for over 20 years. Traditional Irish music is her background but she has been fearless in her musical exploration having defied genres and woven her unique style through country, French-Canadian reggae, hip-hop, dance and classical. Several of her albums have been platinum selling and she has had Number 1 albums and singles including the Steve Earle penned The Galway Girl performed with Mundy, which was featured in the movie PS I Love You and the Bulmer’s TV ad campaign of 2008. She has contributed music to many TV shows and some feature films including Neil Jordan’s Ondine. She has received several industry honours including a Meteor Lifetime Achievement in 2009.

When Nanci Griffith called Frances Black “the sweetest voice of Ireland,” she was paying tribute to someone who has been one of Ireland’s best-loved and most enduring artists since the late 80s, with a string of best-selling albums behind her. The extent of Frances’ popularity and talent has been reflected in the awards and accolades that she has received for her albums and live performances. She has twice been the recipient of one of the highest honours in Irish music, the prestigious Irish Recorded Music Association’s Best Irish Female Award, and was also delighted to receive a National Entertainment ‘Personality of the Year’ award, as it has always been vitally important to her to connect with her audiences during a performance.

Mary Coughlan is known as one of Ireland’s greatest female singers because for over twenty-five years and ten albums she’s made some of the most grown-up, uncompromising, wholly personal and utterly universal music on either side of the Atlantic about what goes on between men and women. She has taken the classic standards of jazz balladry and the recent gems of rock and Irish song-writing, shaken them and offered them up anew, like jewels dripping from the deep, strewn on black velvet. She sings in the voice of the wrong and wronged woman and she makes us think what it is men make of women and what women have to do to make do.

Tickets for An Evening With Sharon Shannon, Frances Black and Mary Coughlan on sale now from Ticketmaster and local venue box offices.