The six finalists of Ardmore Pattern Festival’s Song Contest took to the stage on Wed 24th July to fight it out for the title of 2013 Song Contest Winner. The challenge was to write a song for Ardmore as well as include themes of The Gathering. Entries came from far and wide, including Kilkenny, Dublin, Australia and Wales. With such an eclectic mix of finalists, the guest judges had their work cut out for them choosing a winner. Music writer and producer Bobby Lee from Youghal joined another Cork native, singer songwriter Nicole Maguire to choose the competition winner. 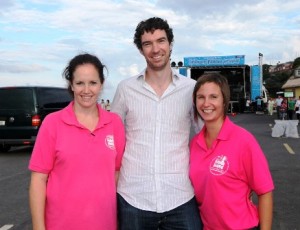 Finalists played to a crowded An Tobar Bar and gave huge encouragement to all singers, but there could only be one winner. Judges chose Declan Carey who lives in Lucan, Dublin as their winner with his song ‘The Sunny South East’. Scooping the title of winner means that Declan bags himself €500, gets to record his winning track with event sponsors Claycastle Recording Studio in Youghal as well as receiving a commemorative vase.

Declan is originally from Glanmire, Co. Cork and spent much of his childhood visiting Youghal and Ardmore with his parents. He was named Declan after the patron saint of Ardmore, St. Declan; his connection to the village is very strong. Where else would Declan bring his wife on honeymoon but Ardmore and they celebrated their 2 year wedding anniversary the day before the Song Contest final.

“I decided to enter the competition just because of the fond memories I have of Ardmore when I was younger and after I got married. I always loved the beauty of the area, the history and the great sense of community atmosphere in Ardmore. It’s the kind of place that I would love to retire to when the time comes. And that was the starting point for the song.” Declan explained.

Although he’s played the guitar since childhood and written songs since his teens, Declan wasn’t expecting the win “I read about the competition on boards.ie on the songwriter’s forum and then checked out the Pattern Festival website. I was delighted to be named as winner. I wasn’t expecting it at all. I was happy that I had a strong song but there were other very strong songs on the night too.”

No stranger to performing, Declan’s performed all over Ireland in the past with Cork singer songwriter Niall Connolly as well as in the UK, France and New York however winning the 2013 Song Contest has given Declan some renewed confidence.

Congratulations go to the other five finalists: from Kilkenny, Joe Butler with ‘The Beauty of Ardmore’, from Cork Declan Hassett with ‘Ardmore Dreaming’ sung by Patricia Quirke, from Wales, David Murphy with  ’Ardmore Rocks’ and Ardmore natives, Kenneth Hickey (living in Australia) with ‘Home’ sung by Natalie Lehane and Maeve Brockie with ’My Hometown Ardmore’.

Ardmore Pattern Festival is one of Munster’s most anticipated annual festivals offering over 90 free family friendly events this year from 21st to 28th July in the seaside village of Ardmore, Co. Waterford.   For more information about Ardmore Pattern Festival, to become a sponsor or volunteer for next year visit the website or find us on Facebook.