Ashley Tubridy “From The Outside In” Debut EP 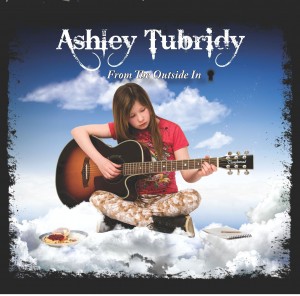 It started on the Late Late Show! Like The Strypes before her, it was a Late Late Toy Show appearance that launched musician Ashley Tubridy onto the national stage. And now, two years after her first appearance on the iconic show, the talented 11-year-old has just released her first EP “From the Outside In” independantly on her own label.

“From the Outside In” features four songs, all written by the Mullingar girl, who at the age of eight became the youngest ever member of IMRO. Recorded in Big Space Studios, Newry by Declan Legge, (who produced Soak’s wonderful Sea Creatures Ep last year), he really let Ashley get involved in the sessions, so much so that by the time the guitars on the last track were recorded, she was counting him in and hitting the record buttons on the multitrack…, and we think he’s done a brilliant job. The EP follows hundreds of high-profile gigs and appearances, including three further Late Late Show appearances, an Electric Picnic slot and much more besides.

The self-taught singer/songwriter has recently been invited to perform at the prestigious Cheerios Childline Concert on November 20th at the O2 in Dublin alongside The Coronas,  The Wanted, Shane Filan, Little Mix and Union J amongst others.

For Ashley, music is an important part of her life, she has thoroughly enjoyed the journey so far and looks forward to what the future brings…and hopefully she can help to inspire a new generation of musicians.

Song-writing and playing the guitar came naturally to Ashley, as she explains:

“I started picking up the guitar at around 4 and a half years old and at about five I would sit in my room and create music despite having no-one else in the house-hold being able to sing a note between them!” she recalls. “At about 5 years old I would go down stairs and play little songs that I had written and composed myself.”

Despite her young age, she says her songs are inspired by her experiences and interaction with the world around her. “My interpretation of relationships with others and how this affects my life in many different ways emotionally is the trigger. These emotions and thoughts and feelings are expressed through my music and lyrics. I think that at one time or another we have all felt emotions or experienced similar pain attached to certain situations in our lives and for this reason I believe that people of all ages can relate in some way to my songs.”

Ashley developed her playing at home, at school, in concert and also whilst busking. She can be sometimes found on Grafton Street in Dublin, Shop Street in Galway and in her native Mullingar, where every Christmas she plays with Niall Horan, Bressie and a host of local musicians to raise money for LARRC cancer retreat.

Ashley dedicates a lot of her time and energies to charity. When she was just 8, she donated four of her own songs to a CD in aid of ISPCC’s Childline, which raised thousands for the charity. She has also contributed to an album for TEAM, the homeless charity, and played at Niall Horan’s Birthday Golf Classic, which raised tens of thousands for Autism Ireland and other charities.

Her calling card was “Friends Forever”, the song she performed on The Late Late Toy Show in December 2011. By January 2012, the song went to Number 2 on the iTunes Ireland download charts and without any physical CDs available, went Top 30 in the Irish Charts. This lead to a further Late Late appearance, with host Ryan Tubridy (no relation) predicting a big future for the singer/songwriter. Then in the summer of 2012 she played for the president Michael D Higgins, who was so enthused that he wrote her a personal letter thanking her.

Ashley’s third appearance on the show came in December 2012 when she was one of many musicians involved in recording “Tiny Dancer – A Song For Lily Mae”, which reached number 1 on the official Irish charts for two weeks. She was back on the flagship RTE show this September in support of her new EP.

A regular on radio too, the confident youngster has played and talked on practically every radio station in Ireland. She has performed live alongside a who’s who of Irish music – Aslan, Declan O’Rourke, Mary Black, Paddy Casey, Kíla, Bressie, Cronin, Mundy, John Spillane, Keith Duffy and hundreds more. A regular at festivals from The Electric Picnic to the Volvo Ocean Race, the in-demand youngster looks set to be a bigger star following the EP’s release, and a national tour is currently being plotted.

“From The Outside In” is available in record stores throughout Ireland and is also available to download from itunes.