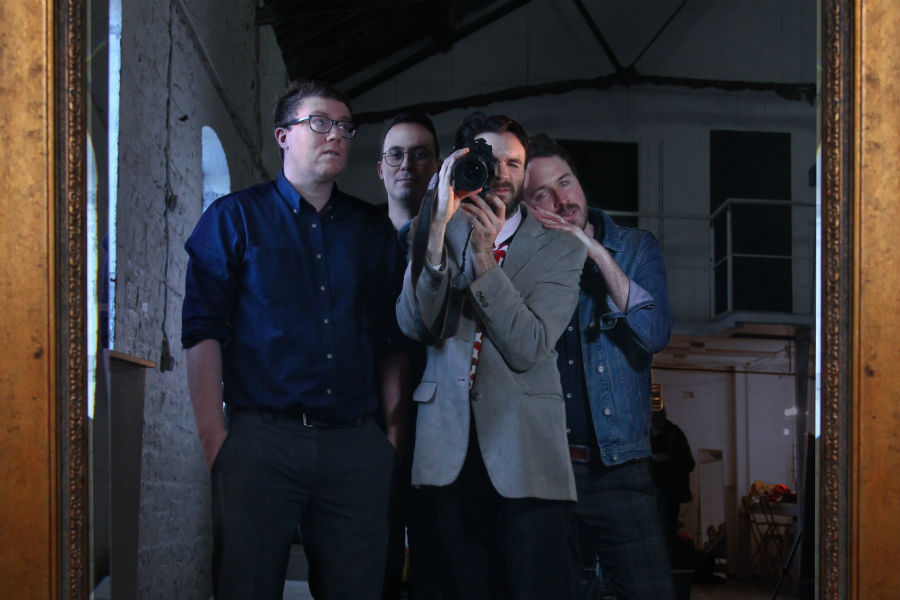 Autre Monde have shared new video ‘Balls of your Suit’.

Padraig Cooney explains: “We were supposed to be over at SXSW now, beginning a run of shows with the Music From Ireland showcase tomorrow night. Obviously that’s not happening but we thought people might enjoy to see us playing live in this way and got down to work on editing some videos. We hired out D-Lite Studios on North Strand for a day in January to do a few of these. It’s directed by Gary Sheridan, who was helped by Daniel Martin. Eoghan O’Brien (our drummer) edited the video. Eoghan’s dad did the live sound. There’ll be more to come.

‘Balls of your Suit’ is a folk song about the influence of right wing media (specifically broadsheet opinion columnists), with a groove that makes it something else. We were thinking of Clannad, Fairport Convention and Roxy Music when we did it, as far as I remember. We were also thinking of ourselves, as this fits into a pattern of writing that we began with Moonlight and Your Name from our previous EP. All the best and keep the chin up“

Autre Monde are Paddy Hanna (vocals), Padraig Cooney (bass, synth, vocals), Mark Chester (guitar) and Eoghan O’Brien (drums, synth, backing vocals). Three of them are from Dublin and Mark is from Cumbria. They met through their involvement together in a network of bands that at one stage or another were central to the Popical Island collective (Skelocrats, Grand Pocket Orchestra, Ginnels, No Monster Club).

Elsewhere, the record stretches out confidently: luxuriating in baths of vintage synthesizers on ‘The Operator’, descending into something wild and uncertain in the final minutes of ‘Brain Upon Your Pillow’, mixing the pastoral with the robotic on ‘Balls of Your Suit’ and ‘Three Mandolins’. ‘Truly Glowing’ is a euphoric finale.

The album title is taken from a line in Fredric Jameson’s ‘Postmodernism: The Cultural Logic of Late Captialism’ where he writes: “in a world in which stylistic innovation is no longer possible, all that is left is to imitate dead styles, to speak through the masks and with the voices of the styles in the imaginary museum.”