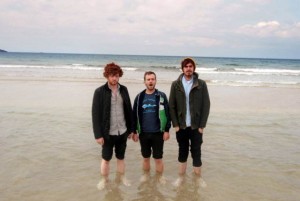 “We’re keen to explore an interest in the wider world, really analysing how every detail slots together, with a view sympathetic to history, nature and human relationships. For us it’s about stories, views and in a completely non cheesy way making the most of our time in this world” says bassist/vocalist Ewen Friers.

It is this literate thought provoking content, along with a distinctive sound the band themselves like to think of as “heavy pop”, that has caught the attention of the UK’s music press. Rock Sound magazine recently labelled the trio, “the most exciting band to come out of Northern Ireland… Possibly ever!”

Having spent the last couple of years touring the UK and Ireland, as well as mainland Europe, clocking up shows alongside the likes of The Bronx, The Joy Formidable, Twin Atlantic and Therapy? along the way, the band are now set to unleash their debut album, ‘Finding St Kilda’, produced by Rocky O’Reilly (And So I Watch You From Afar, Fighting With Wire) at Start Together Studios in their native Ireland earlier this year.

Speaking of the record and the band’s approach in general, Friers says, “We started playing music together as kids and we decided then we’d live by two concrete rules – We’d only play music we wanted to hear and write words we thought were important. For us, the album is the perfect representation of what we are. Written by Mastodon fans hooked on Fang Island!”

Crushingly heavy and littered with pop sensibility throughout, ‘Finding St Kilda’, is an undeniably original and ‘heart on your sleeve’ affair. It’s no surprise that Kerrang! has already declared that “cult status looks assured.”