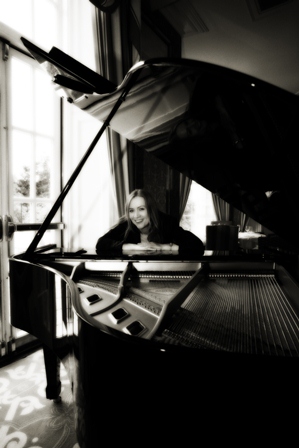 Having just returned from her sell-out concert in Berlin, award winning songwriter Barbara Dunne embarks on her first solo Irish tour. Barbara made her first TV appearance on Kenny Live to great acclaim and went on to record an album with the late Billy Brown of the Freshmen.
She has performed for Mick Jagger, Burt Bacharach, Shirley Bassey and the Prince of Monaco among others.
A talented pianist Barbara was mentored along the way by Noel Kelehan and Jim Doherty and others. ‘Her background as a jazz and classical musician is clearly in evidence…’ (Hot Press).
Shay Healy gave Barbara her first radio play and was instrumental in the delivery of her first single ‘Driving November’, produced by Kevin Maloney (U2 and Sinead O Connor) which won the Dun Laoghaire Song Contest 1999 and became a radio hit.
‘Finish Starting’ which got rave reviews; ‘music that excavates deep riches throughout’  (Jackie Hayden), ‘Part of a generation of real Irish talent’ (Luke Whitington) was the album that followed. Her work has also been described as ‘Tori Amos-like‘ and ‘Joni Mitchell-ish‘ (Jackie Hayden Hot Press).
The tour kicks off in Bewley’s Cafe Theatre on the 8th of October and goes countrywide until Spring 2012.
For more details or to download some of her music got to
www.sonicbids.com/BarbaraDunne
Spotlight