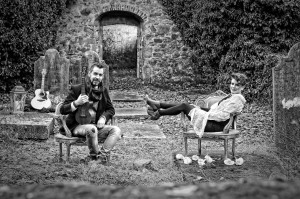 & Liebe Kelly (B&L) both grew up in Carrickmacross and were childhood friends. Both moved to various locations through their teens and 20’s and a number of years back found themselves living back in their hometown. Now in their 30’s B&L are both highly trained and educated musicians and between them play a wide variety of instruments – a list which is continuously being added to.

‘Mariposa’ by Barry & Liebe was recorded back in March of 2014 and launched to what can only be described as 2 amazing sell out shows in The Carrickmacross Workhouse, soon to become The Workhouse Theatre. With 4 tracks of original material, Mariposa is an eclectic mix of Alternative Easy Listening which gives the listener just a taste of what is to come from Barry & Liebe.

Tracks:
1. Dear Beautiful Dreamer
2. You Know What
3. Reveal
4. Wonder Why

DEAR BEAUTIFUL DREAMER – a song written by Liebe about and dedicated to a dear friend of Liebe’s who passed away a number of years ago. Dara Haksins was a great lover of poetry and the outdoors. The video ( https://www.youtube.com/watch?v=EEvZmcLL6-w ) to accompany was shot and edited in such a way to have Dara featuring in the video in many different and subtle ways. The Butterfly (Mariposa in Spanish) which features on the E.P. sleeve is a concept on which the song was built – Watch the video and see this mystical butterfly being brought to life. Incidentally the Butterfly was hand drawn by Liebe and scanned into the design work.

YOU KNOW WHAT – a rhythmical song which airs some bottled up opinions and views about the day to day slog that life can sometimes present to us. YOU KNOW WHAT is based on past and present with old and new lyrics from Barry’s catalogue. A classical interlude reminds us that safety and tranquility is never too far away and we should always strive & fight to better ourselves.

REVEAL – based on mainly ​vocal work REVEAL is a song which expresses that awkward moment when you don’t know where you stand in the relationship. The echoing “REVEAL” throughout the song signifies that nagging feeling that maybe it’s just not meant to be.

WONDER WHY – simply about the one that got away.

Digital download of ‘Mariposa’ is available by clicking the following link:  https://itunes.apple.com/ie/album/mariposa-ep/id853749726