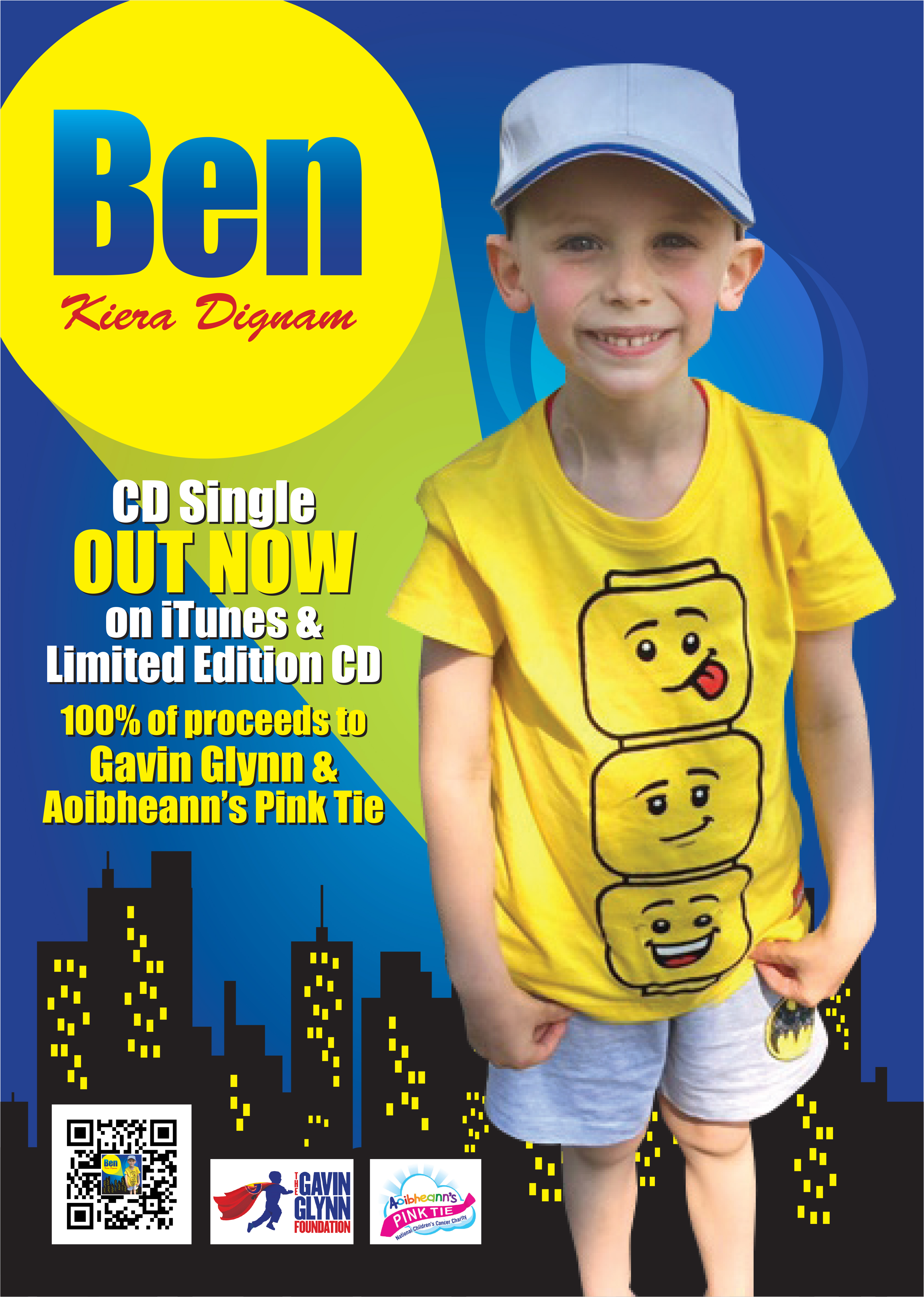 A reproduction of the Song “Ben”, written by Don Black and made famous by Michael Jackson has been re-released by Kiera Dignam in Memory of Batman Ben.
Ben Farrell, the five-year-old boy who captured the public’s heart – known as Batman Ben because of his love for the super hero – died from a rare form of cancer in August this year. Now in an effort to help children in a similar position, the charity single “Ben” is set to be released On Friday October 28.

The single will be sold for €5 on CD and €1.29 on iTunes, with all proceeds going to two charities that supported Ben and his family: The Gavin Glynn Foundation and Aoibheann’s Pink Tie.
Touched by Ben’s story, Stephen Browne, a music promoter from Ben’s hometown in Finglas and manager of recently reformed band the Brilliant Trees came up with the idea for the single. Stephen worked with numerous individuals and organisations to help bring it to life. The royalty fees were kindly waived by song writer Don Black, Kiera Dignam, daughter of Aslan’s Christy Dignam, was happy to lend her amazing voice to the cause, artwork was provided free of charge by Printbroker.ie and the cost of the recording and production was provided through a grant from eBay Ireland’s Global Impact Team.

Stephen Explains: “Like most people hearing the heart-breaking story of Ben, I just wanted to help. When the idea for the song came to me I decided to chance my arm and contact Don Black not really expecting a reply. To my surprise, I received a reply within an hour from Don not only offering his support but he had also made contact with Sony to get the process moving. What a kind man.”

Ben’s mother Val Farrell hopes the proceeds will help towards finding a cure one day for this awful disease. Filled with emotion, she explains how Ben loved this song: “When Kiera told us she had been working on possibly releasing a single for Ben, I thought how lovely, what a great idea – but when she told me the song was ‘Ben’ by Michael Jackson I cried. Through Ben we hope to find the strength to continue. We hope to continue to be inspired to live as fully as he did and we hope to continue to allow Bens smile to change the world for the better…. we hope to make him proud.”
The award-winning songwriter Don Black, who had originally offered this popular song first to Donny Osmond before Michael Jackson turned it into a smash hit, says he is thrilled with this new recording of the Oscar-nominated single. “I do love this version of the song, it’s a terrific vocal,” he says. I’m so upset to hear this sad news, this is a truly heart-breaking story and I send my condolences to all the family.”

The legendary Christy Dignam of Aslan fame was by Kiera’s side at the studio to help and offer his guidance and the track was produced and recoded by Stuart Gray, a multitalented musician who has worked with Hozier, Ryan Sheridan and Brian Kennedy, to name a few.
Kiera hopes the song will help raise much needed money for this worthy cause. She says: “Ben by Michael Jackson seemed to be the perfect song and I then found out Ben had it on his iPad and loved the song, which sealed it for me that this defiantly had to be the song. Recording it, I wanted to strip it back and just have my vocal not overly produced with loads of backing vocals. I wanted it simple with nice guitar and strings. The producer Stewart listened to what I wanted and was on the same wavelength and I’m delighted with the finished product.”
Kiera admits it was emotionally challenging to record the song because Ben had just died when they went into the studio to make it. It was, of course, all the more poignantly painful in light of her own father’s battle with an incurable cancer.

“By the time I got into the studio to put down my vocal, Ben had just passed away. So, what would have been a very difficult thing to do became a hundred times harder,” she reveals. But my aim was to do Ben’s memory justice and to give his parents and family something they could listen to and think of Ben – and I hope it can be of some comfort to them.”
Kiera played the song earlier this week for Ben’s mother who was moved to tears when she heard it. Val sent a simple but touching text message to all those who chipped in: “It’s absolutely beautiful. Thank you from the bottom of my heart.”

The single is available from various outlets and Pre Order from iTunes now.
http://itunes.apple.com/album/id1166265013?ls=1&app=itunes

The Gavin Glynn Foundation believes that all children with cancer deserve the best care.
We know first hand what it is like to have to travel to other countries with your child to receive treatment.
We want to take this financial burden and stress away from the families so they can focus all their time on their child and family.
Our mission is to be able to assist families with:
• Transportation (eg. Flights, Car Hire).
• Transportation to and drop the designated Airports.
• Accommodation within, or close to, the designated medical center.
• Food and living expenses for the duration of the child’s treatment while abroad.
• Travel pack to include toys for the child and siblings travelling.
Aoibheann’s Pink Tie
“National Children’s Cancer Charity” was set up in 2010 by Mick Rochford and Jimmy Norman after the tragic loss of Jimmy’s daughter Aoibheann to cancer aged just 8 years. During Aoibheann’s year long battle with this dreadful disease, the family found little or no financial or practical support for children and their families.
Jimmy and his family had a large support network of friends and family but found that many on the ward had virtually no support at all.
When Aoibheann passed away the men wore pink ties at the funeral which was Aoibheann’s favourite colour. The charity was formed in her memory to remedy the lack of support for other children and their families going through treatment.