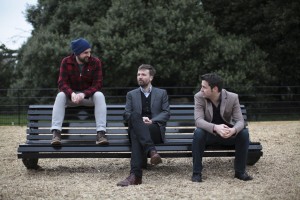 Bell X1 recently announced that their sixth studio album, Chop Chop, will be released on June 28th, on their own label Belly Up. Last month the band reveled a song from the album – “Starlings Over Brighton Pier”

The band will play The National Concert Hall on June 29th and have just announced a date for Cork – Live at the Marquee on July 4th.

The album was recorded in January of this year at Tarquin Studios, Bridgeport, Connecticut. It was produced by Peter Katis and Thomas Bartlett.   Bell X1 will premiere Chop Chop live at The National Concert Hall, Dublin on Saturday June 29th, playing it in its entirety, before performing some songs from their back catalogue.   Paul Noonan said “Last summer the three of us got together in Dave’s studio and demoed 15 songs. We returned to simpler times, when all around here was fields – piano and guitar, bass & drums… less computers and noises from boxes. Shrink the palette!  We’ve loved some of the records that Peter Katis has made in the last few years, and the cut of Thomas Bartlett playing with The Gloaming, so when the stars aligned for two weeks in January we made a record together – Chop Chop.